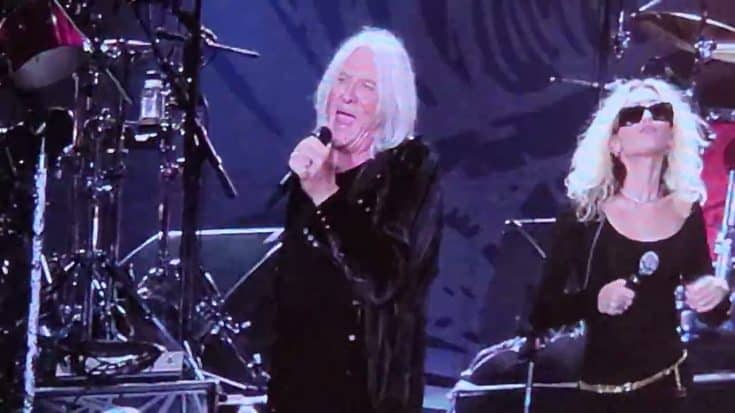 They’ve also performed with Dave Grohl and Foo Fighters guitarists Pat Smear and Chris Shiflett, plus Weezer drummer Pat Wilson, all together they opened their two-song set with “Rock of Ages.” Smear said from the stage:

“I came here in 1983 to see this band play this guitar on this song we’re about to play.”

While Cyrus said before leaving the stage:

Elliott honored the late drummer in one of the episodes of his weekly radio show a month after his death. He stated:

“What a life force that man was.

“An incredible drummer. One of the greatest modern drummers there’s ever been. What a lovely, humble, sweet guy he was as well.”

The drummer can also relate to the sadness felt by the Foo Fighters and understood their loss deeply. That was the exact same suffering they had endured decades earlier. Elliott explained:

“I still can’t believe it myself actually. Of course, most of you will know that I’ve been through this myself with Steve Clark 30 years ago. So I know how the guys feel.”

Elliott was pertaining to the Def Leppard guitarist who died in 1991, adding:

“All we can hope for is that [the Foo Fighters] take a bit of time to let themselves grieve. Circle the wagons, and just wait it out and then decide what they wanna do.”

Meanwhile, Collen also shared his thoughts in a post to the Def Leppard Facebook page after hearing the passing of Hawkins. He said:

“Just heard the tragic news about Taylor and having known him for about 30 years, this hit home pretty hard.

“Taylor was the sweetest, funniest guy, so I watched with joy and excitement as he progressed from working in a local music store to playing with Alanis Morissette and ultimately joining up with Dave and the Foos. His talent grew exponentially as did his success, but he always remained just like that kid I would see at Laguna Beach with his boogie board. He will be incredibly missed. Much love to his family and bandmates.”

Watch their fan-filmed performance below.