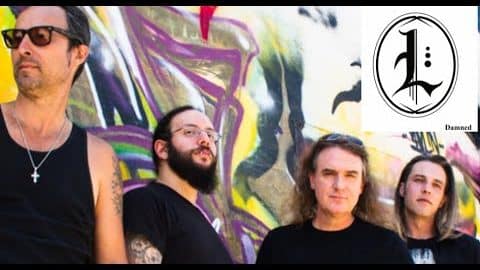 David Ellefson’s post-Megadeth project The Lucid has released a second single titled “Damned.” Along with vocalist Vinnie Dombroski, guitarist Drew Fortier and drummer Mike Heller, Ellefson previewed their self-titled debut album, which will be out on October 15 via SpoilerHead Records.

“It’s been a real blast making a record with these guys and I must say that it’s refreshing to explore some new musical avenues,” Ellefson said in a statement, “to step out a bit from what each of us have done stylistically in our own careers. There was an effortless synergy that came with creating these songs together which is always amazing when working with new people.”

“I’m looking forward to everyone checking it out!” he added.

Ellefson teased his Lucid project in November 2020 when he appeared on “The Chuck Schute Podcast”. He had nothing but praises for his new bandmates.

“We all met in L.A. We got the songs together and we all met in L.A. in mid-July. I plugged in and banged out 10 songs in two days,” he gushed. “And it was fun. Mike was very good in the studio; he really knows his way around.”