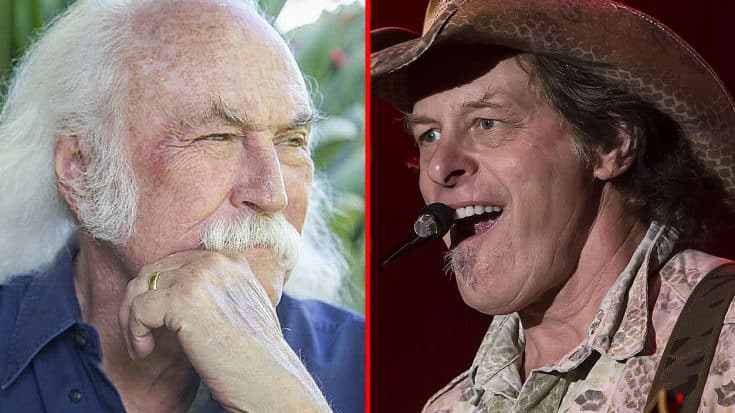 No one seems to be immune to the current political climate that’s got everyone’s temper on a hair trigger, ready to fire at the slightest provocation and for Crosby, Stills, Nash (and sometimes) Young founder David Crosby, tensions rose to a fever pitch this weekend as he lashed out at Ted Nugent on social media over the guitarist’s visit to the White House last week. Retweeting the photo of Ted with President Donald Trump in the Oval Office, Crosby used the moment to add his own commentary to the photo:

this picture says it all …the two most insincere smiles in history
what a pair of assholes https://t.co/sNED02l5dj

Nugent is a brainless twit ….I can out think him without even trying hard https://t.co/6PNLB6lTzi

Unsurprisingly, Nugent took the opportunity to fire back during an interview with New York’s WABC Radio, responding directly to Crosby’s verbal slings and arrows with a few of his own, taking aim at Crosby’s battles with substance abuse:

“David Crosby, he’s kind of a lost soul, and he’s done so much substance abuse throughout his life that his logic meter is gone,” he said.

“His reasoning and his depth of understanding is pretty much gone, so it doesn’t surprise me, I feel quite sad for the guy.”

Ouch. There haven’t been any further exchanges between the two, but something tells us that this won’t be the last time they engage in a war of words.