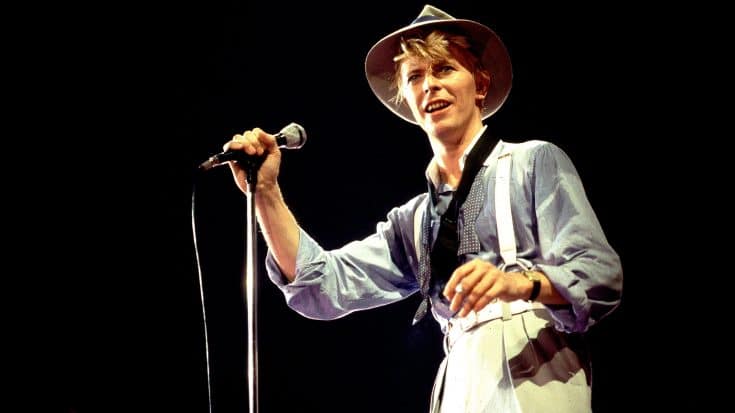 David Bowie on 8/3/83 in Chicago,Il. (Photo by Paul Natkin/WireImage)

In honor of the late and great David Bowie, his social media team put up an official playlist for his 75th birthday on January 8.

The influential artist was born David Robert Jones in 1974. After 18 months of a secret battle with liver cancer, he passed away in his New York City apartment, days after the release of his twenty-sixth and final studio album, Blackstar, and his 69th birthday in 2016.

“For those of you who don’t do audio streaming we’ve curated the David Bowie 75 Official Playlist on YouTube. Enjoy a whole load of Bowie’s most celebrated tracks and music videos from across the decades all in one place for your sound + vision pleasure: https://davidbowie.lnk.to/DB75YTPlaylist“

They’ve also launched two curated experiential “Bowie 75” pop-ups in New York and London in October, 75 days before his birthday this month as part of the year-long celebration marking the milestone.

These pop-up shops will give a “unique and immersive career-spanning deep dive” of his career providing access to hours of previously unseen video concert footage, including rare footage from his Heathen and Reality eras.

The London location at 14 Heddon Street is where the cover of his 1972 album classic “The Rise and Fall of Ziggy Stardust and the Spiders from Mars”, was shot, while the 150 Wooster Street spot is steps away from Bowie’s long-time downtown New York City neighborhood.

These locations will allow fans to listen and see Bowie in a lifelike music experience as if you were witnessing a David Bowie concert for yourself. Fans can also place themselves in some of Bowie’s iconic outfits and costumes, purchase limited-edition apparel and collectibles, and view exclusive fine art galleries celebrating his many legendary eras.

You can also listen to the “Bowie 75” playlist on Spotify.