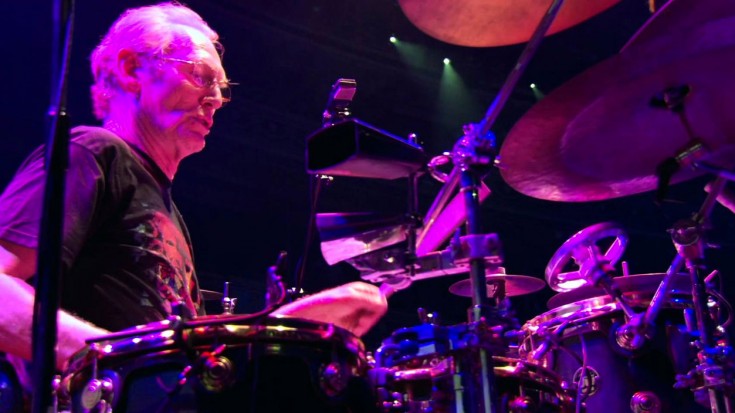 When the lights went down on Cream in 1968, drummer Ginger Baker was just shy of 30 years old and already celebrated in the rock world for his unique approach to the rhythms that drove Cream. Boasting an impressive blend of influences that ranged from rock to jazz and even African, Baker would go down in history as one of the most influential drummers of all time and while he’d enjoy a successful solo career following Cream and even Blind Faith, we always kind of wondered: would we ever see him behind the kit with old bandmates Eric Clapton and Jack Bruce for another run with Cream?

We got our answer in 2005 when despite false starts and turmoil the band returned to Royal Albert Hall for a short lived reunion where the 66-year-old Baker resumed his rightful place behind his drum kit and absolutely crushed ‘Toad’.

Still as solid as ever, there’s not a force on earth that could ever keep Ginger Baker from the perfect time kept, and especially on a song like ‘Toad’ – he’s as close to a human metronome as anyone could possibly get, every fill and flourish seamlessly flowing into the next. Coming 37 years after the original ‘Toad’ solo at Royal Albert Hall, Ginger is even more of a threat behind the kit because he’s had nearly 40 years to perfect his technique and trim the fat, leaving only a performance that’s lean and in absolutely flawless condition.

To say he’s a legend is the understatement of the century – we’re not worthy!