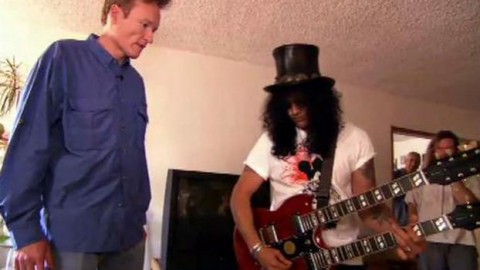 If I were shopping for guitars, I would absolutely love it if Slash helps me pick one. Seriously, that’s pretty much like book shopping with JK Rowling or basketball shoe shopping with Lebron James. Either way, there’s no better retail therapy than that!

Anyway, so we know Conan O’Brien is a brilliant talk show host. But did you know he’s also a guitar player? Yep, he even had a guitar battle with Jack Black! In fact, Conan loves his guitars. So when he decided to get a new one from Craigslist, he asked help from his friend Slash — probably for some inputs and to make sure he doesn’t get ripped off. After the reunion gig and a series of Coachella shows, Slash managed to squeeze in some shopping time and man, this is nothing short of hilarious. It’s Conan, so what can you expect right?