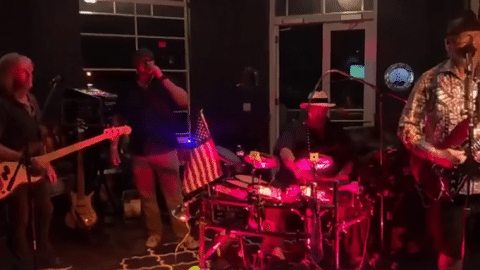 He’s Back On Live Stage

AC/DC bass player Cliff Williams recently performed with a Florida-based cover band called 24 Carat and took on AC/DC’s 1980 classic hit “You Shook Me All Night Long.” It was at a private party in Florida and 24 Carat posted photos from the event on their Facebook page with the caption, “So this just happened! Cliff Williams from AC/DC and 24 Carat!”

You can check out the video here.

Cliff Williams was with AC/DC since 1977 and until he announced his retirement in 2016 at the conclusion of the Rock or Bust World Tour. He said in a video that “It’s just, I’m ready to get off the road and do what I do in between tours.”

However, a photo that surfaced a few months ago had fans speculating that he could be part of the group’s comeback album and a possible world tour. AC/DC hasn’t confirmed the rumors yet and so everyone’s still waiting for any of them to say something.

Speaking about his playing, Williams shared: “It’s not the line that counts. It is the feel. My favorite AC/DC tune to play is ‘Down Payment Blues’, because it’s so simple. I play four notes throughout the song, but I get off on the whole thing—not me noodlin’ away.”

What are your thoughts on AC/DC’s rumored album?