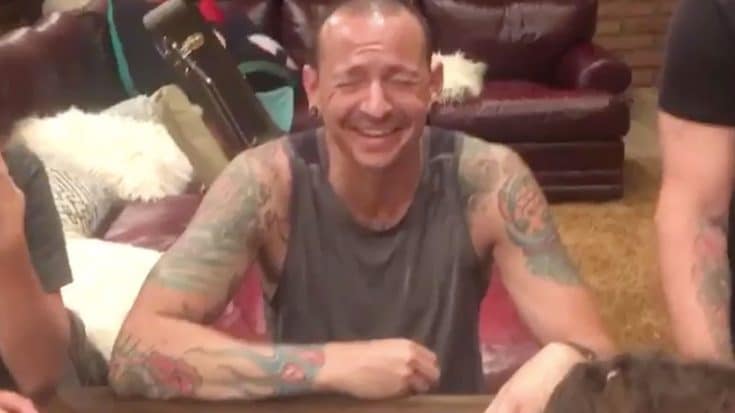 Depression is a dark, insidious foe that appears in disguise, hiding until it’s time to strike and take away good people. People with friends and families and people who loved them, left behind and wondering what they missed and where they went so wrong that they missed all of the signs that the person they loved was in trouble.

In the case of late Linkin Park frontman Chester Bennington, depression hid itself behind a devoted family man breathtakingly in love with his wife and children before it claimed his life on July 20th – hiding so well, in fact, that just 36 hours before his death Chester was filmed laughing hysterically with his family as they sampled flavored jelly beans, serving as a tragic reminder of the heartbreaking truth that has plagued his wife, Talinda, in the weeks and months since:

My next tweet is the most personal tweet I have ever done. I’m showing this so that you know that depression doesn’t have a face or a mood.

After revealing that she had an incredibly personal tweet coming shortly, Mrs. Bennington posted the video she’d taken just 36 hours before her husband took his own life – a video so incredibly out of step with what was going on in Chester Bennington’s mind, body, and spirit that it’s almost impossible to imagine that just over a day later he’d be gone. The video, around 40 seconds long, is available just below this article; as always, our hearts and prayers are with Chester’s wife and children during this time, and we wish them all we’ve ever wanted for them: peace.

This is what depression looked like to us just 36 hrs b4 his death. He loved us SO much & we loved him. #fuckdepression #MakeChesterProud pic.twitter.com/VW44eOER4k