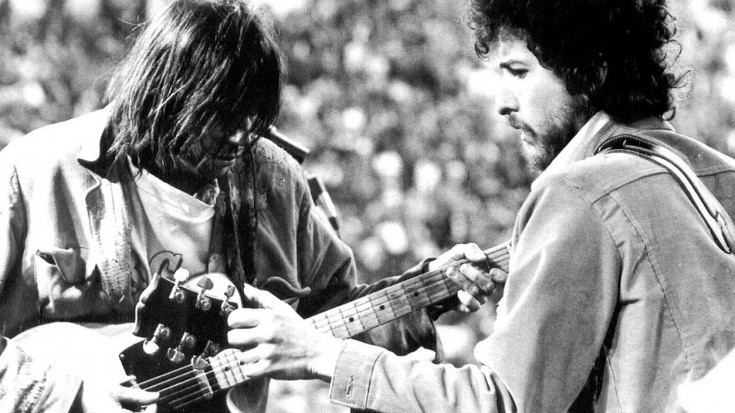 If you were one of thousands at the SNACK Benefit Concert in 1975 where Bob Dylan took the stage with Neil Young, then you probably remember firsthand – their rendition of “Knockin’ On Heaven’s Door” was unlike anything you’d ever heard before! If weren’t there, never fear: we’ve got the audio from one of the coolest onstage collaborations we’ve ever heard and it’s sure to blow you away. During the SNACK Benefit Concert at San Francisco’s Kezar Stadium, Bob Dylan and Neil Young were united for what would ultimately be an 8 minute long jam session that featured Young’s “Helpless” and Dylan’s “Knockin’ On Heaven’s Door”; what made this performance so incredible – besides the two legends onstage, that is – is the way it flowed together.

Neil kicks off “Helpless” with his trademark harmonica before launching into the first verse, colored by the lap steel guitar accompanying him; Bob is singing along, but as the radio announcer at the end notes he was unfortunately inaudible on “Helpless” and in a very Eagles-esque, “Hotel California” kind of way the song fades out and the band plays on for a few minutes with no real direction in mind.

Fun Fact: Young performs “Helpless” with the Band and Joni Mitchell in the film The Last Waltz.

Here’s where it gets interesting: because it shares a similar chord progression, “Helpless” just fades right on into an impromptu rendition of “Knockin’ On Heaven’s Door” (though, that night it was known as “Knockin’ On The Dragon’s Door” for some reason) seamlessly and almost flawlessly! The pairing of the two songs can be described only as inspired and judging by the roar of the crowd as the last note rings out, they were just as floored as we were hearing this for the first time.