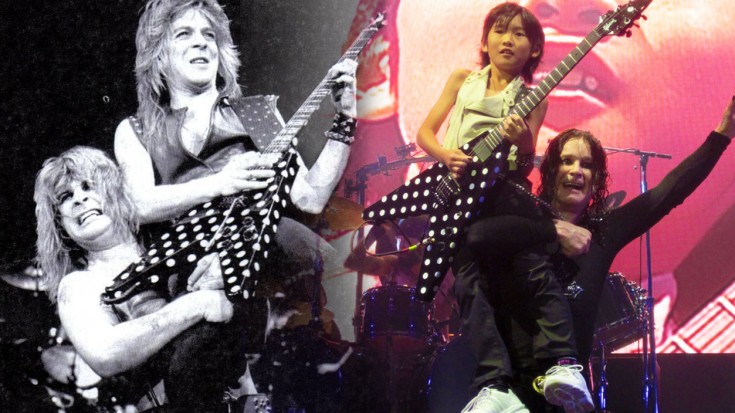 Wherever Randy Rhoads Is, We’re Sure He Loved This

I don’t know what Ozzy Osbourne felt when he heard 10-year-old guitar prodigy Yuto Miyazawa rip through ‘Crazy Train’, but if I had to guess, it would be something along the lines of sheer disbelief mixed with the brutal ache that comes with missing Randy Rhoads. Much like Randy, Yuto is a child prodigy that not only excels at playing the guitar, but he’s mastered it on a level not seen since Randy – in fact, it’s pretty safe to say that Randy was probably reincarnated as a Japanese boy with a fierce passion for anything with 6 strings.

In honor of this young man’s once in a lifetime talent, Ozzy invited Yuto and his polka dot flying-v onstage for a killer performance of ‘Crazy Train’, featuring the iconic guitar solo that made Randy Rhoads a household name.

The best part of the entire performance though, hands down, wasn’t the actual song, or Yuto’s moment to shine: it was the moment when Ozzy got so swept up by Yuto’s playing that he picked the boy up the way he used to hoist Randy up and let the entire arena see this painfully talented kid in all his glory. If that part doesn’t give you chills, then I don’t know what else will!

This is one you definitely don’t want to miss. Wherever Randy is, we hope he saw this and loved it as much as we do!

Crazy, but that’s how it goes
Millions of people living as foes
Maybe it’s not too late
To learn how to love
And forget how to hate

Let’s go!
I’ve listened to preachers
I’ve listened to fools
I’ve watched all the dropouts
Who make their own rules
One person conditioned to rule and control
The media sells it and you live the role