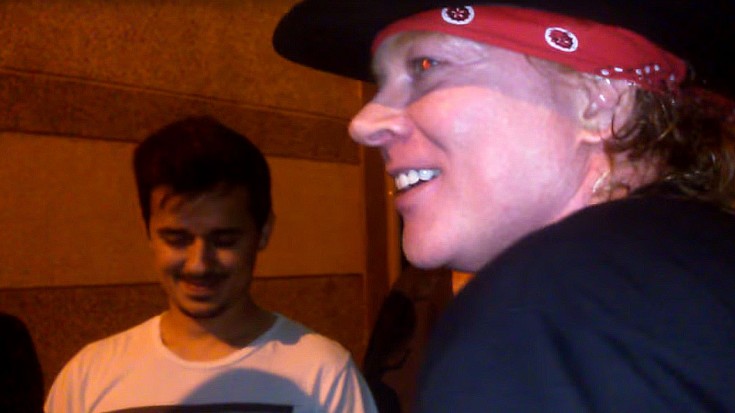 For a rockstar with a reputation for being not so nice and a serious appetite for destruction, it sure seems like Axl Rose has turned over a new leaf as of late. Showing up to shows and rehearsals on time, knocking vocal performances out of the park and now he’s been spotted hanging out with fans – and from the looks of things, he enjoys the interaction with fans of both Guns N’Roses and AC/DC even more than the fans do!

Shortly before AC/DC kicked off their Rock Or Bust Tour in Lisbon, Portugal this weekend, Axl took time out of his evening – though no doubt tired from AC/DC rehearsals that he calls a ‘freight train’ of energy – to stop and chat with fans, answering questions about how he likes their city, even hinting at a possible Guns N’ Roses European tour!

Whether it’s just the passage of time at work or the realization that there’s a lot at stake, it seems like Axl’s done quite a bit of growing up in the past few months and much like these fans, we’re proud of how far he’s come and can’t wait to see what the next few months and years have in store for him.