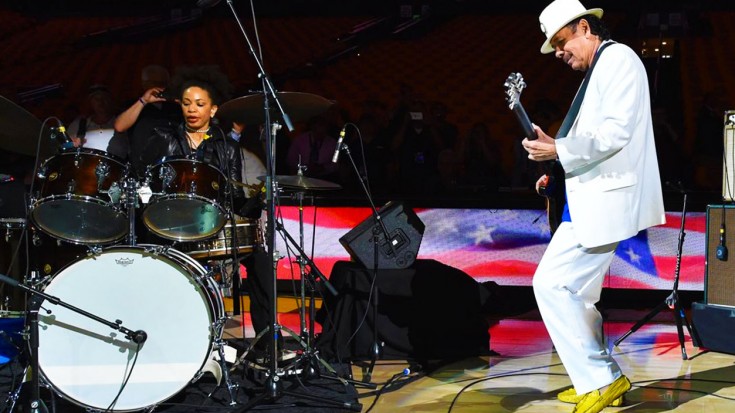 It’s been nearly 50 years since Woodstock alumni Carlos Santana, then 23, watched Jimi Hendrix rip his way into history with an offbeat version of “The Star Spangled Banner” that would become iconic. 47 years later after Jimi played to a nearly empty crowd on the final morning of Woodstock, Santana took a page from Hendrix as he re-wrote the rules for what our national anthem should traditionally sound like as he performed a spirited take on “The Star Spangled Banner” at the NBA Finals this week.

Fun Fact: Carlos Santana began playing the guitar at a very young age, starting at eight. This may have partially been due to the fact that his father was a professional violinist.

Wife and drummer Cindy Blackman, acting as Santana’s rhythm section, added an entirely different kind of feel to “The Star Spangled Banner,” filling the normally quiet spaces with colorful drum fills that while seemingly out of place worked beautifully with Santana’s Latin-infused brand of rock guitar playing. This isn’t your grandmother’s national anthem, but it provided a neat little change of pace before a high-octane game between the Golden State Warriors and the Cleveland Cavaliers – be sure to check it out in the footage below and let us know what you think!