Bruno Mars Turned The Grammys Purple In Prince’s Honor, And Doves Aren’t The Only Ones Crying 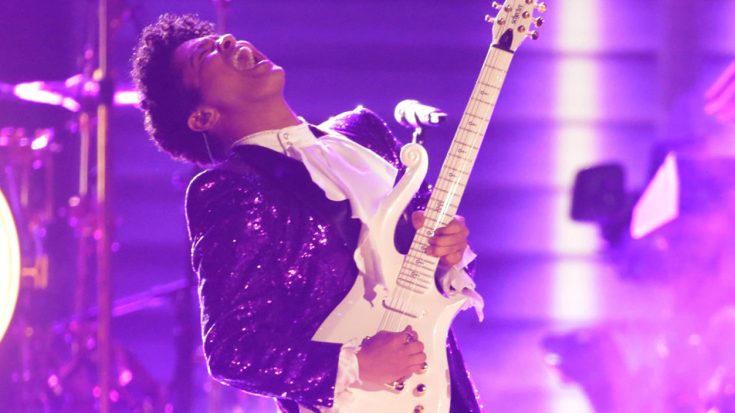 “We Are Gathered Here Today To Celebrate This Thing Called ‘Life’…”

For as many things went wrong at last night’s Grammy Awards, so many more things went right – namely the star studded tribute to late legend Prince. Featuring the talents of longtime friends and sometimes collaborators The Time, the late icon’s tribute brought a dose of something fun, funky, and purple to the table when Grammy winner Bruno Mars appeared flanked by his band The Hooligans, rocking a sparkly purple suit, ruffled shirt and a white Prince-style cloud guitar – that he definitely knows how to play – and proceeded to turn the Grammy Awards into a funked up dance party in Prince’s honor.

In the 10 months since Prince’s death at the age of 57 we’ve seen all manner of tributes, good and bad, but Bruno’s salute to a man whose style, stage presence, and sheer musical genius he’s spent a lifetime admiring is far and away the best we’ve seen; it fulfilled Bruno’s boyhood fantasies of growing up to be like Prince without being self indulgent, and it was fun without being irreverent or offensive to Prince’s legacy. Not to mention, Bruno absolutely played the hell out of that cloud guitar; can you believe that solo he knocked out at the end of “Let’s Go Crazy”? Absolutely amazing and we’re pretty sure that wherever Prince is, he was dancing right along with the rest of us!