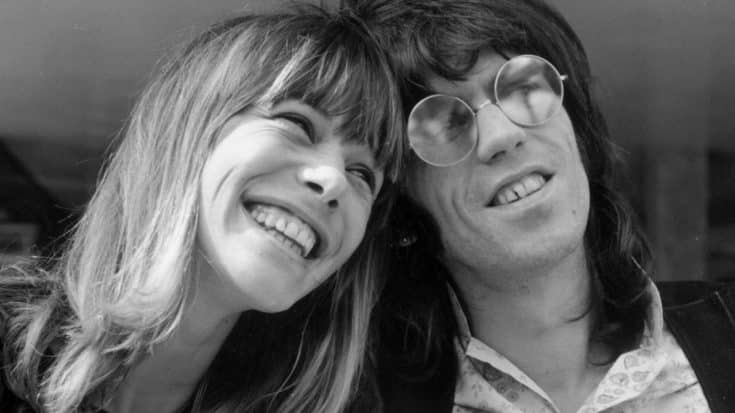 Rocker Is Inconsolable After Death Of Former Girlfriend, Anita Pallenberg

Our hearts are with Rolling Stone Keith Richards as we report the death of his former partner and mother to two of his adult children, Anita Pallenberg. Famously known for her romantic involvement with late Rolling Stone Brian Jones as well as her 12-year relationship with Richards, Pallenberg’s role in rock and roll legend is not a small one; her journey began when she moved to Paris in her late teens to pursue a career in acting and modeling, first meeting Brian Jones backstage at a Rolling Stones concert in 1965.

As Jones’ drug use and physical abuse began to take a toll on the relationship, Pallenberg found herself drawn closer to Richards and ultimately in a relationship that would span 12 years, drug fueled adventures and busts that found them opting for rehab instead of jail time, and three children – Marlon, Angela, and infant son Tara, who died at only 2 and a half months of age in 1976.

“My first impression was of a woman who was very strong,” wrote Keith Richards in his autobiography, Life. “I was right about that. Also an extremely bright woman, that’s one of the reasons she sparked me. Let alone that she was so entertaining and such a great beauty to look at. Very funny. Cosmopolitan beyond anyone I’d come across. She spoke three languages. She’d been here, she’d been there. It was very exotic, to me.”

In addition to her romantic role in Richards’ life, Pallenberg’s role extended far beyond that of a groupie or a band member’s significant other and into that of the music of The Rolling Stones, her opinion so respected by Mick Jagger that tracks on Beggars Banquet were remixed upon her critique; in 2002, Pallenberg is credited as a background vocalist on “Sympathy for the Devil”.

Again, our hearts are with Keith Richards and children Marlon and Angela as they mourn the loss of their colorful, brilliant friend and mother. Rest in peace, Anita.