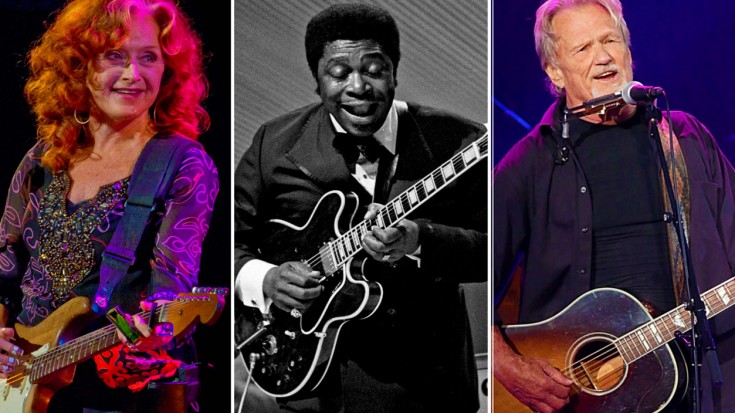 Despite a heartbreaking month for music in general, the blues world is about to celebrate in a big way with the official induction of two of its most loved figures into the Austin City Limits Hall Of Fame – Bonnie Raitt and late blues legend B.B. King, who passed away in 2015 from natural causes. One of the most influential female musicians of the late 20th century and B.B. King’s favorite slide guitar player, Bonnie Raitt has appeared on the hit television show several times since 1984 and B.B. King appeared on the show for the first time in 1983, returning again 13 years later in 1996.

Also being inducted is critically acclaimed songwriter Kris Kristofferson, who debuted on Austin City Limits in 1982 and returned in 2014 for the show’s 40th anniversary special.

Known for being a launchpad for the career of the late Texas blues legend Stevie Ray Vaughan, Austin City Limits is the longest-running music series in American television history and the only TV series to ever be awarded the National Medal of Arts. It’s featured everyone from Stevie Ray Vaughan And Double Trouble to The Allman Brothers Band, and helped to cement Austin’s reputation for being the official “Live Music Capital of the World”.

The induction ceremony is slated to take place October 12th at ACL Live at the Moody Theater in Austin, Texas and we can’t wait to see these legends receive one of the highest honors Austin has to offer!