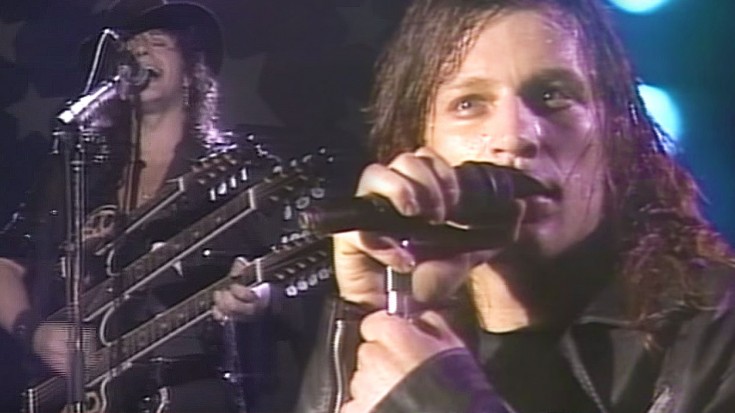 By 1989, Bon Jovi was a household name. With their album Slippery When Wet dominating the charts, videos in constant rotation on MTV and the band headlining any major music festival worth attending, these boys from New Jersey were riding high on the success they’d worked for since Bon Jovi formed in 1983. So when the band took the stage at the Moscow Music Peace Festival in 1989, no one was surprised when they put on one of the best performances of the entire festival!

‘Wanted Dead Or Alive’ was the star of the show, featuring guitarist Richie Sambora playing a 3-necked guitar for the song’s rhythm portion, and some of the most amazing backing vocals we’ve ever heard from him. If you’re not blown away by the acoustic interlude he plays leading into Jon Bon Jovi’s arrival onstage, watch it again – it’s amazing!

An expert showman, Jon Bon Jovi is unstoppable when armed with long eyelashes, a dazzling smile and a voice you wouldn’t believe, he takes hold of the audience for 8 minutes that seem too long but not long enough.

It’s easy to see why Bon Jovi was the biggest band on the planet. They’re master performers who don’t receive nearly enough credit for both their songwriting and musical ability, and their live shows are out of this world! It’s safe to say that this performance of ‘Wanted Dead Or Alive’ just might be one of the best of their entire career!

It’s all the same, only the names will change
Everyday, it seems we’re wastin’ away
Another place where the faces are so cold
I drive all night just to get back home

Sometimes I sleep, sometimes it’s not for days
The people I meet always go their separate ways
Sometimes you tell the day
By the bottle that you drink
And times when you’re all alone all you do is think

Oh, and I’m a cowboy, on a steel horse I ride
I’m wanted dead or alive

I walk these streets
A loaded six-string on my back
I play for keeps ’cause I might not make it back
I been everywhere, still, I’m standing tall
I’ve seen a million faces
And I’ve rocked them all