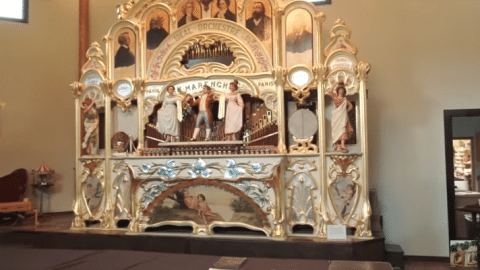 Bohemian Rhapsody Will Never Be Heard The Same Way, Again…

If you were to make a list of rock songs that should be given a 5-Star rating, there are many songs that should be included. “Stairway To Heaven”, “Hotel California”, “Thunderstruck”, “Dream On”, “Welcome To The Jungle”, and many others. But there is one song that truly stands out amongst them all and that song is Bohemian Rhapsody. Written by legendary Queen front man Freddie Mercury, this is a song that is still revered by many as one of the (if not THE) greatest rock song of all time. It is a song that is classically inspired yet years ahead of its time. With its iconic harmonies and astonishing guitar work, this song deserves its own induction into the Rock & Roll Hall Of Fame.

Since its release, the song has been covered in just about every possible way imaginable. Whether it’s acapella, or piano, or even bluegrass you name it, it’s been done. But have you ever heard this song played back on a 100-year-old Fairground Organ. Chances are that you haven’t, but that’s about to change and for the better, might I add! What you’re about to watch is the aforementioned get played back on the aforementioned instrument. It is simply beautiful. Don’t believe me? See for yourself!