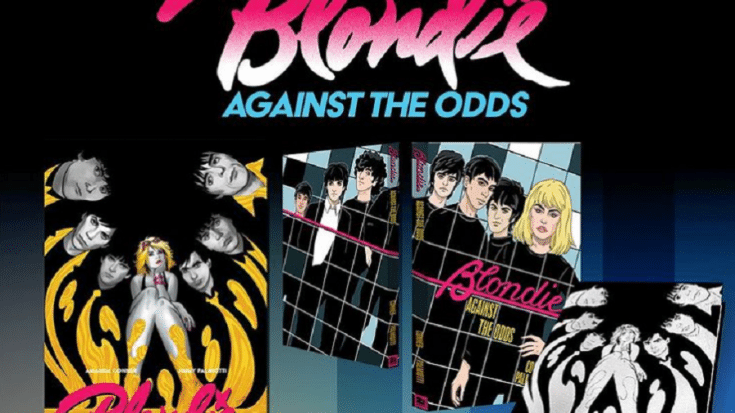 Blondie is collaborating with Z2 Comics for a brand new graphic novel, Against the Odds. Written by Amanda Conner and Jimmy Palmiotti, who worked on the 2013 relaunch of Harley Quinn series for DC Comics, and with illustrations by acclaimed comic book artist John McCree, the story follows the legendary band’s rise to superstardom in the ’70s – from playing in clubs in downtown Manhattan to becoming household names.

Conner actually witnessed Blondie performing at CBGB’s and Max’s Kansas City. She said in a statement, “When I was a growing up (and still pretty much, to this day), a few of the things I loved were music, comic book heroes, ultra-cool style, and a wicked, wild, and weird sense of humor.”

She added, “Blondie embodies all those things, and when I listen to their music, I can’t not dance.”

She also told Rolling Stone, “I think Debbie [Harry] and her attitude and her style have been influencing and inspiring my art and characters for years. Harley included!”

Harry and Chris Stein are both involved in the development of the graphic novel – overseeing the historical details and even its dialogue. Palmiotti revealed that the pair are “looking over everything we are writing, fact-checking, and adding some perspective that only they can provide” which in turn gives “the book a certain edge and feel like no other.”

It’s slated to be released in a variety of formats.