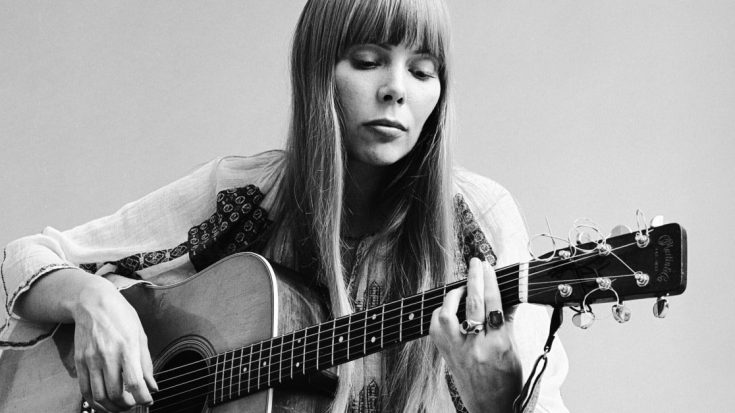 It’s been five decades since Joni Mitchell released her landmark album “Blue”. It was a quantum leap in terms of songwriting and musicianship. In truth, few could match “Blue”. There’s no weak moment, no fillers, and it’s flawless from start to end. Every song is brilliant, and there are definitely no throwaways here.

And in celebration of the 50th anniversary of this masterpiece, here are some artists who broke down the record, and shared what it meant to them (via Los Angeles Times).

“Playing along with her spare dulcimer accompaniment, I was free to substitute whatever chords I felt, which was great,” James Taylor said, “but of course, it was her voice and the songs themselves that make “Blue” so singular.”

“I believe that some of those songs were written with me in mind although, as a songwriter, I know how songs can have their own bent truth,” he added. “Still, I hear a personal message in several of them, her gift to me: the lucky one.”

For him, “”All I Want” allows itself to be light and loving, as sunny a sentiment as we are apt to hear from her. It’s a kiss, a love note, a valentine.”

““Little Green” perfectly sums up “Blue’s” appeal in that it’s immediately appealing, it’s got a beautiful, plaintive melody, it’s musically straightforward,” Elton John explained, “she’s still working very much in that folk-y singer-songwriter style — but then you peel back the surface and it has this extraordinary emotional depth.”

“Good poetry, man. But she converts pain and loneliness and sadness and failure and struggle into emotionally moving sound,” he noted. “Every time I listen to it, I am moved to tears. It’s just that strong.”

“Blue” is Mitchell’s crowning achievement. Years later, it remains untouchable and unrivaled. This is Mitchell at the top of her game.