Based On A Survey, 64% Of Musicians Are Thinking Of Quitting 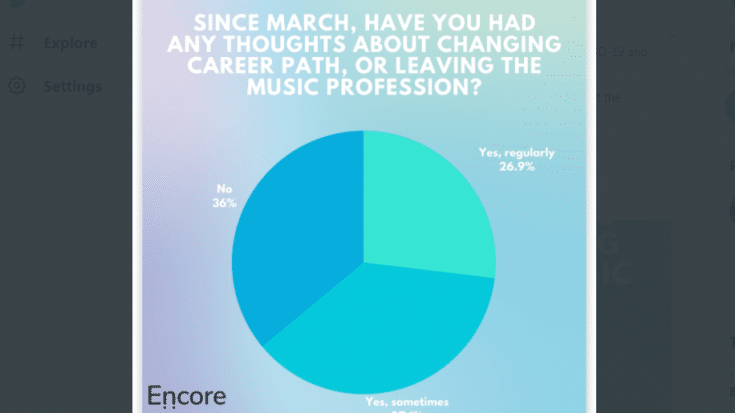 Four Out of Ten Have Applied For Non-Music Jobs

Amid the pandemic, a survey by British booking organization Encore Musicians found out that around 64% of musicians are already thinking of quitting the industry. It was conducted across all genres and four-fifths of the respondents make a living from music and are therefore considered professional musicians.

Encore Musicians wrote, “The results show that due to widespread event cancellations, musicians have lost an average of 87 percent of their live bookings, and with them their main source of income.”

Four out of ten had scheduled bookings for the rest of 2020, 40% have applied for a non-music related work since the lockdown in March, and 41% haven’t received any financial support from the government. CEO James McAulay said, “We’re acutely aware of the damage the pandemic has done to our musicians’ livelihoods, but I was still shocked to see just how few bookings most musicians have left in the diary for 2020.”

He added, “This problem is being felt across the industry – from signed veterans to young musicians at the beginning of their careers. The government must act now to make sure our musicians aren’t left behind.”

How hard have working musicians in the UK been hit by COVID-19 and lockdown?

We surveyed 568 musicians on Encore to measure the scale of the pandemic's impact on them.

In summary: the short-term outlook is bleak.

The government NEEDS to do more for musicians.

Just to spell it out: a MAJORITY of working musicians considering giving up music.

2 in 5 musicians currently have ZERO gigs booked between now and the end of December.

On average, musicians had 27 gigs booked between August and December 2019. pic.twitter.com/QKNTBQxnTp