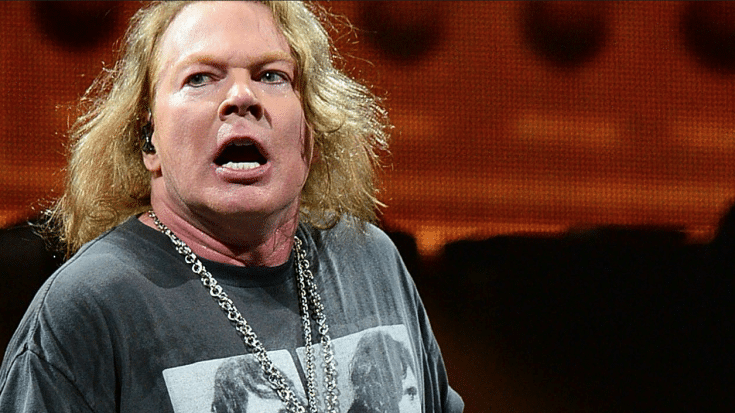 Rose Suffers Through Severe Illness While On Tour

It’s been two years, nearly three now, since Guns N’ Roses embarked on their record setting Not In This Lifetime… tour and we’re pleased to report that not only is Axl Rose not the impulsive, destructive young man we remember from 25 years ago, he’s become the musician and professional we always knew he could be.

Rose proved this in spades over the weekend when he was left “severely ill” just before Guns N’ Roses were to perform in Abu Dhabi, even requiring an IV and “a bunch of injections” at one point. Other singers would have called the show off, but not Axl; the 56-year-old rocker managed to pull himself together long enough to hit the stage for a whopping 16-song set (pretty short by Guns N’ Roses’ standards these days) and stunning not just his audience that turned out in droves to hear him sing classics like “Sweet Child O’ Mine,” but his own bandmates.

After the curtain fell following the band’s “November Rain” finale, Slash and Duff McKagan took to Twitter to thank fans for coming out and to praise Axl’s dedication to his craft and his band.

Abu Dhabi, you guys were fucking great tonight! Axl was severely ill. But you all were hugely supportive. Thanks for that. We'll see again next time! Cheers! iiii]; ) '

“Abu Dhabi, you guys were f—— great tonight! Axl was severely ill. But you all were hugely supportive. Thanks for that,” Slash wrote, signing off with “We’ll see again net time! Cheers! iiii];)”

McKagan, who like Slash has seen the best and worst of Axl over the decades, left the most poignant response to Axl’s performance. He wrote, “Thank you Abu Dhabi! @axlrose pulled a damn miracle…the man was beyond ill, and pulled off something I’ve never seen in my 40 yrs of playing. You all pulled him thru. Til next time!”

Thank you Abu Dhabi! @axlrose pulled a damn miracle…the man was beyond ill, and pulled off something I've never seen in my 40 yrs of playing. You all pulled him thru. Til next time!

It’s unknown what Axl was hit with – but anything that requires an IV and injections is likely serious enough to have kept a wiser – and less dedicated – entertainer off their feet and getting some much needed rest and relaxation. Here’s to Axl for pulling through the Abu Dhabi show like a champ, we hope he gets to feeling better soon!