Trent Reznor: I Wasn’t Prepared For What I Saw And It Really Wasn’t My Song Anymore 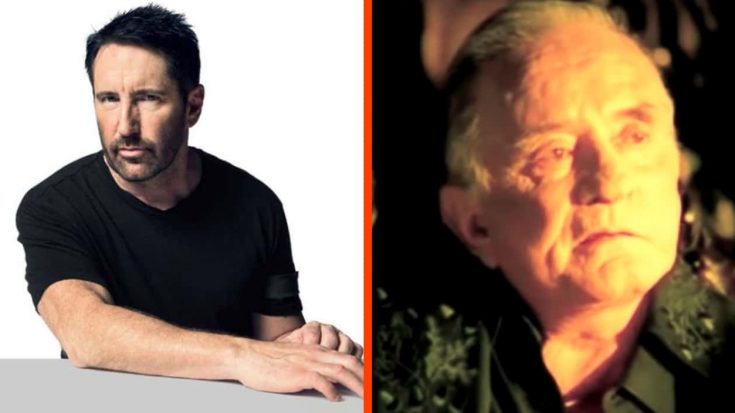 There’s A Man Coming ‘Round Takin’ Names- And Songs

And this is where the saying was born: Once Johnny Cash covers your song– it’s not your song anymore.

NIN’s songwriter, Trent Reznor prolifically responded to Cash’s “Hurt” cover with: “I wasn’t prepared for what I saw, and it really then, wasn’t my song anymore.”  There was no warning that Cash would be covering “Hurt.” Reznor said,

“Then I got a CD in the post. I listened to it and it was very strange. It was this other person inhabiting my most personal song. Hearing it was like someone kissing your girlfriend. It felt invasive.”

Reznor respectfully added in an NME interview that the cover meant more to him than winning something like a Grammy. The cover and video were recorded and filmed shortly before Cash’s death. Popular opinion across almost every genre of music is that “Hurt” by Cash,  is the best cover of all time.

Here are 11 other Johnny Cash covers that dominated our hearts…

Sting- I Hung My Head

Johnny Cash has the type of bass-baritone voice that can cover any song and make it- heavy. Heavy isn’t bad, especially in a song like Sting’s “I Hung My Head.” The song is transformed into a country-murder ballad and there isn’t anyone as hardcore as Johnny Cash to cover a theme like that. About the cover, Sting says “Who better to sing that song? He got one of the words wrong, though. He changed “stream” to “sheen”. But I wasn’t going to call him up and say, “Hey Johnny, you’ve got to re-record it!”

This cover is so badass. Johnny Cash and Joe Strummer singing Bob Marley’s “Redemption Song” AND because every cupcake needs a cherry- Tom Morello is strumming on the guitar. Rick Rubin, who produced Cash’s and Strummer’s last albums says, “Joe was coming every day, because he loved Johnny Cash, and he just happened to be in L.A. on vacation. And he actually extended his trip a week longer just to come every day and be around Johnny.” Two rock gods- immortalized together.  Joe Strummer died less than a year after Johnny Cash.

Martin Gore of Depeche Mode was inspired by the unbalanced love between Elvis and Priscilla Presley. She saw Elvis as a mentor and idolized him. Gore wrote the song to explain that “everybody’s heart is like a god in some way.”  The band wasn’t even aware that Johnny Cash had covered the song and to this Gore said, “I think when you’re somebody of Johnny Cash’s caliber, you don’t ask for permission.” Yeah, true.

Jimmie Davis and Charles Mitchell- You Are My Sunshine

Despite drama surrounding who actually wrote it, “You Are My Sunshine” was recorded by Jimmie Davis and Charles Mitchell in 1939. This song has been covered by everyone from Aretha Franklin to your mom. As we all know by now, Johnny Cash is a master and anything he touches only gets better with no need for improvement. That given, he covered this song flawlessly even when accompanied with his long-time good friend (who recorded many duets with him), Bob Dylan.

Johnny Cash has mastered so many genres that he has been inducted in the Rock and Roll, Country, and Gospel Hall of Fames. So obviously, he can also take on a band like U2.  The band’s front man, Bono, remembered Cash by saying “”He was more than wise. In a garden full of weeds — the oak tree.” You can hear Cash’s gravely wise voice cover “One” making it another heavy hitter.

This is a traditional folk song that should have been written for Cash. But it wasn’t so he had to just reach out and take it himself. The song itself is about not being to evade the consequences of your actions or “sins.” The lyrics are easily applicable to anyone’s behavior in trying times. The posthumously released music video features an all star cast- everyone is in it.  Who better to cover a song about sin and god than a country music outlaw?

The Beatles- In My Life

Tom Petty- I Won’t Back Down

This is yet another cover that flows perfectly with Cash’s ability to give everything a haunting feeling. Yes, it’s a highly relatable song to everyone who’s ever been through any turbulent period of life. But, Cash has that low-pitched voice that echoes in your soul- it’s the sound of perseverance through the seemingly impossible. Tom Petty recorded this cover with Cash but only took part only in back up vocals and guitar playing.

It feel’s so good to hear the familiar guitar twang that Johnny Cash is famed for. You can hear it at the beginning of this Bruce Springsteen cover, “I’m On Fire. The song is about a man’s lust for a woman he either can’t have or shouldn’t lust for. Springsteen and his band were in fact inspired by Johnny Cash’s rhythm while producing the song in 1982. Not a stranger to difficult ordeals portrayed in music, Johnny Cash perfectly covers “I’m On Fire” with a slow tempo.

Regarding writing “Bridge Over Troubled Water,” Paul Simon says “I remember thinking, ‘This is considerable better than I usually write.” Good enough for the man in black? Yes. Johnny Cash actually covered this song with Fiona Apple on back up vocals.  Both singers make a great pair with their omniscient voices.  Just another perfect cover in Cash’s repertoire.

The Band- The Night They Drove Old Dixie Down

This is a damn good song- period. Johnny cash seemed to recognize this stone cold hard fact. Levon Helm of The Band, has clarified that the song is about the sacrifices of war. Johnny Cash is the sound of internal war- his sound is that of an intrinsic battlefield. Oddly enough, Johnny Cash actually upped the tempo on this song and still made it feel strong and powerful. Where some people use instruments to define a feeling, Cash uses his singing.