August 27, 1990: Stevie Ray Vaughan Dies, And The World Is Suddenly A Much Darker Place 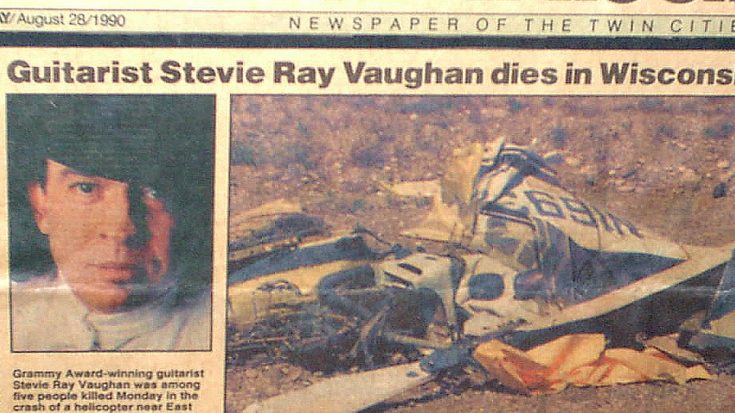 In his last few hours, Stevie Ray Vaughan played a sold out show at the Alpine Valley Music Theater in East Troy, Wisconsin with Eric Clapton, Buddy Guy, Robert Cray and his beloved big brother Jimmie, trading licks for hours alongside friends and idols before boarding a helicopter shortly before 1am with members of Clapton’s road crew.

As the helicopter tried to ascend a 1,000 foot ski hill, weather conditions and heavy fog made it impossible for the pilot to see, resulting in a fatal crash that wasn’t discovered until the following morning.

In the same way that it’s absolutely poetic the way the universe sees fit to grant a few select people with unimaginable talent, it’s equally unfair when that force snatches it right back – it leaves you reeling, torn between celebrating what you had and at the same time wanting to scream at the stars at the unfairness of it all but more often than not, doing both.

Stevie Ray Vaughan’s August 27, 1990 death is an event that calls to mind that war of feelings in the face of such a tremendous and sudden loss; just 35 years old, Stevie had overcome seemingly insurmountable obstacles ranging from growing up in poverty to beating a near fatal addiction to drugs and alcohol, riding into the most stable and successful part of his life to date on the wings of a glowing career and just like that, he was gone.

One of music’s best and brightest, his passion for playing the guitar for people who loved to listen was overshadowed only by his kindness, and the sheer love he had for those around him. It’s been 28 years and the world has changed, and with it the way we listen to music and the quality of which we accept. One thing’s stayed the same, though: Stevie Ray Vaughan is still one of the best musicians to have ever picked up a guitar, and his loss is something that cannot be overstated.