Angus Young Finally Speaks On The Future Of AC/DC… 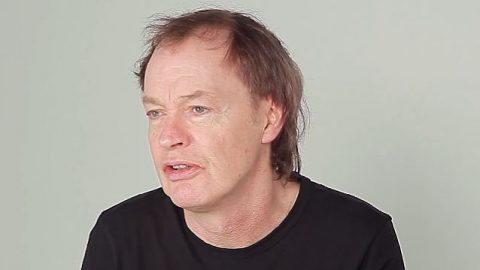 AC/DC is regarded as one of the most successful hard rock bands that have ever taken to the stage, but they have been having some trouble lately. Not with their music, I don’t even think that’s entirely possible. AC/DC have never written a bad song. What they’re having trouble with is losing members left and right. First of which was rhythm guitarist Malcolm Young. He was diagnosed with dementia and was admitted to a nursing home. Next was drummer Phil Rudd who plead guilty to drug possession and threatening to kill someone… Thirdly was frontman Brian Johnson who made it known that he had hearing problems. Finally, the most recent example was bassist Cliff Williams announced that he will retire after their current Rock Or Bust tour. So, with all that being said, we’ve been waiting to hear from the last soul member Angus Young. Here’s what he had to say.

Angus Young speaking to Rolling Stone in regards to the future of AC/DC – “At this point, I don’t know. We were committed to finishing the tour. Who knows what I’ll feel after? When you sign on and say, ‘I’m gonna do this and that,’ it’s always good to say at the end of it, ‘I’ve done all I said I would do.”

As you can see, everything is still up in the air. Admittedly, the future does look grim. Everything is falling apart, and though AC/DC have always been a band to persevere, it doesn’t really look like they can win this battle, but again, that’s just what it LOOKS like, only time will tell. For now, we can only wait. Again, Angus said that it’ll really all depend on how he’s feeling. So in the mean time, by a ticket a go see them live. They’re still putting on a great show!