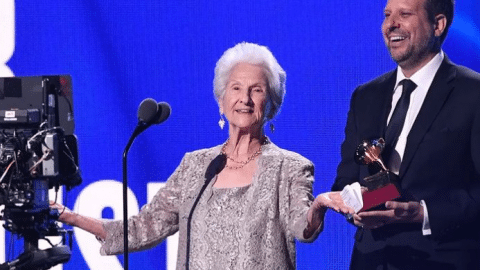 It is truly impressive and inspiring to see someone achieve their dreams despite their age in life. Just like Angela Alvarez, a Cuban-born singer, and songwriter who won a Latin Grammy for Best New Artist at the age of 95.

Although Alvarez grew up surrounded by music, she shared that she was restricted by his own father to perform or sing unless it was for her family. When she got married and became a mother to four children, she sent them to the United States while she remained living in Cuba.

When it was her turn to find herself outside her home country, her husband and only daughter both died because of cancer. Music became her outlet as she poured her feeling into writing. Fast forward, when her kids gave birth to their offspring, and these grandchildren grew up, one of them became a music producer.

Carlos José Alvarez discovered that his grandmother had written over 50 songs throughout her life. He recalled:

That scenario led Carlos into asking Angela if she would like to sing. Carlos said:

“And her answer was ‘Carlos, my dream is to leave this life knowing that somehow my music would last.’ And that was the beginning.”

Angela Alvarez’s inspiring story has caught the attention of many people including actor Andy García. Garcia decided to become the executive producer and narrator of Miss Angela, a documentary Alvarez. And of course, the most remarkable event of her life would be the nomination for a Latin Grammy.

Alvarez competed with other singers as young as 17 years old. It was later announced that she and Mexican singer Silvana Estrada both won the award. Alvarez said upon receiving the award:

“I want to dedicate this award to God and to my beloved homeland, Cuba, which I will never forget. Also, to those who have not achieved their dream, although life is difficult, there is always a way out, and with faith and love, they can achieve it. I promise it’s never too late.”