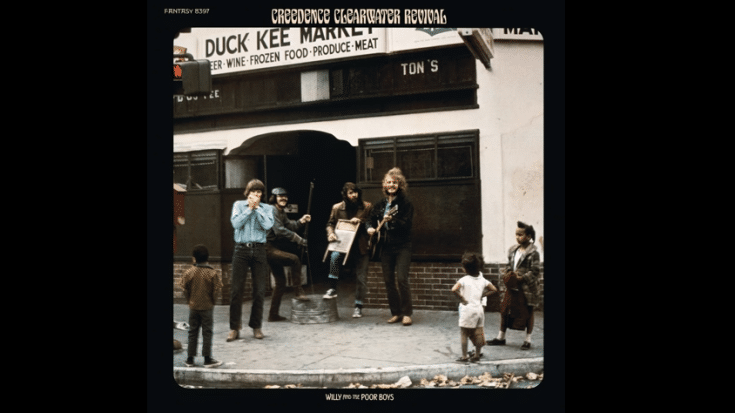 Creedence Clearwater Revival was on a roll in 1969 – releasing three albums that spawned instant classics. Although there were two stellar releases before it for that year, “Willy & The Poor Boys” was far from being a disappointment. It’s not flawless but the whole LP is tight and consistent. There may be weak moments but there’s not one bad song.

Although it’s not a concept album, there’s a oneness from the first to the last track. It’s a cohesive record with no filler and nothing that sounds out of place. From the get-go, it may seem like it pales in comparison to its predecessors but a second listen might convince the listeners otherwise. From hard rock tunes to bluesy numbers, it’s well-balanced and thoroughly entertaining to listen to.

It starts off strong with “Down on the Corner” which helps set the tone for the LP. It’s upbeat and joyful with impeccable vocals by John Fogerty. “It Came Out of the Sky” is an fun rock number with lovely guitar work. “Cotton Fields” is a cover of a Lead Belly original but it doesn’t sound dispensable. As mentioned earlier, there’s a oneness among the songs including those that CCR reworked. “Poorboy Shuffle” may be on the forgettable side but it’s still tastefully done. “Feelin’ Blue” has that country flavor.

Side two kicks off with the musical masterpiece “Fortunate Son” – a powerful and ferocious protest song. It’s a gritty hard rock tune that has stood the test of time. “Don’t Look Now (It Ain’t You or Me)” may often be overlooked but it’s still just as brilliant as the other tracks here. “The Midnight Special” is another cover that doesn’t sound like one because it has that CCR feel. “Side o’ the Road” showcased Fogerty’s guitar skills. The LP wraps up with “Effigy” – a haunting and heartbreaking number.

“Willy & the Poor Boys” is one of their best works. 1969 saw excellent releases from several rock acts and yet, this particular CCR LP is not something anyone would want to skip.