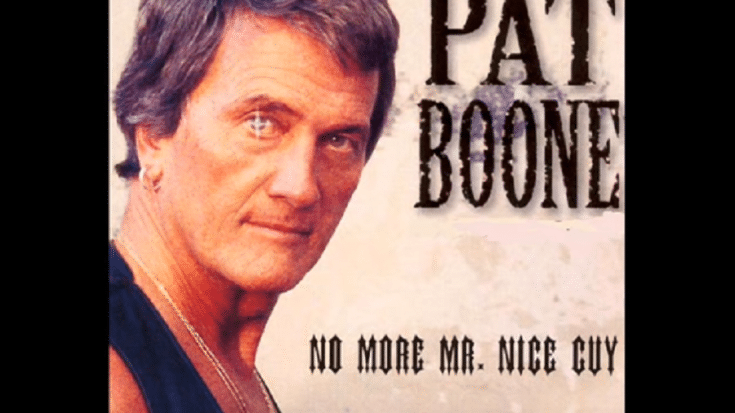 On January 28, 1997, Pat Boone released “In a Metal Mood: No More Mr. Nice Guy” which features his covers of hard rock and heavy metal classics. Boone even brought in other iconic musicians like Ronnie James Dio, Ritchie Blackmore, and Dweezil Zappa. Some of his longtime fans weren’t pleased especially since Boone was mostly known for his pop and gospel songs.

He wasn’t about to cross over to the dark(er) side. The guy merely wanted to record his versions of tracks that he genuinely liked. It all started as a joke and it was his conductor Dave Siebels who made him a mix tape of songs he could cover. Surprisingly, he enjoyed listening to them.

“I realized that there was a whole lot of music that I had written off because it was different from things I had come to appreciate, and particularly metal, because it was noisy and angry-sounding and distorted, and guys were shouting lyrics I didn’t understand. But I got the music, and then I began to go into stores buying albums, and I’d go through the metal bins and start finding things by Motörhead and Poison. And, of course, Alice Cooper and Metallica and Megadeth, all these groups.”

The jazzy arrangements were entirely different from the original. And with his departure from his usual songs, albeit temporarily, it shocked fans. Even more so when he went on to promote the album wearing a leather vest and sporting temporary tattoos. Despite the outrage and backlash from the Christian community, the album was a hit for Boone.

“And it was very gratifying that all the artists whose songs I did, and from whom I’ve heard, were complimented and delighted with the way I treated their songs, as real music, not just rock anthems. That includes Alice Cooper, Guns N’ Roses, Metallica, Ronnie James Dio and Ozzy Osbourne! As long as they liked what I did with their songs, I was complimented and happy.”

Pat Boone leaping from gospel to heavy metal is much like seeing Ozzy Osbourne singing praises for Sunday service. It’s jarring and cringe-worthy at best. Honestly, there are just two ways of looking at it. If you take it seriously, then you lose. It is what it’s supposed to be from the beginning – a joke. And Boone obviously didn’t mind being the butt of that joke. He deliberately donned the typical rockstar ensemble to lighten the mood and maybe, just for the heck of it.

But if you find this humorous and funny, then you obviously wouldn’t mind the sloppy arrangements, less-than-stellar versions, and an all-together forgettable album. It’s weird and gimicky. It’s also confusing – Boone took these hard rock and heavy metal records and turned them into jazz but he showed up at the American Music Awards in 1997 looking like a rock musician. That ought to tell us that Boone’s merely poking fun at himself.

All things considered, we’re giving this 3/5 stars because it’s enjoyable and fun to listen to. Other than that, it doesn’t offer anything else.