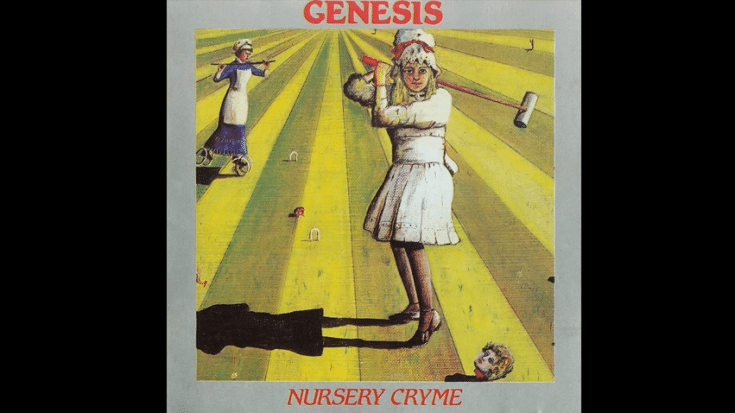 Genesis’ third studio album was the first to feature Phil Collins on drums and vocals, and Steve Hackett on guitars. It was a pivotal moment for the band from a musical standpoint. It wasn’t a massive commercial success upon its release and it’s far from being the perfect record. But in hindsight, it’s a quintessential Genesis LP that helped pave the way for Genesis to make their mark in music.

It was clear from the get-go that the addition of both Collins and Hackett made the LP more exciting and imaginative. They didn’t break new grounds, but from the album artwork to the songs themselves, everything had a whimsical feel to it that’s difficult to ignore. Genesis showcased their talent with their debut album but it wasn’t until “Nursery Cryme” when they finally came into their own and proved that they weren’t your average prog-rock group.

After their first two releases, “Nursery Cryme” was a breath of fresh air.

It kicks of with the stunning masterpiece, “The Musical Box” – a haunting and powerful number that’s basically the epitome of prog-rock. “For Absent Friends” is simple and quiet with Collins taking over the lead vocal duties. “The Return of the Giant Hogweed” is heavy and menacing but definitely one of the tracks that stands out. It’s highly ambitious but Genesis delivered.

“Seven Stones” is underrated but intense and interesting. “Harold the Barrel” is dripping with enough sarcasm to show that Genesis also had a sense of humor. “Harlequin” is lovely and breathtaking, albeit weaker compared to the other songs. “The Fountain of Salmacis” is absolutely brilliant and a classic through & through.

“Nursery Cryme” may not be the greatest Genesis album but it’s undeniably one of their finest musical works.