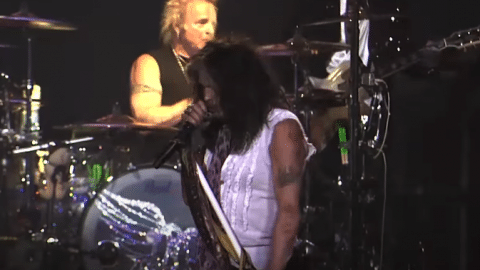 Aerosmith have been celebrating their 50th anniversary by streaming archival video series from their live performances. It started last July and it’s now coming to an end.

The band is recently wrapping up their limited-edition archival video series with footage of a 2016 concert in Mexico City. It was filmed live at the city’s Arena Ciudad de Mexico on October 27, 2016.

Aerosmith are on their Rock ’N’ Roll Rumble Tour during that time and they rocked their classics, such as, “Draw The Line” and “Rats In The Cellar,” as well as “Crazy” and their hit ballad “I Don’t Want To Miss A Thing.”

Made available on August 26, the unreleased Mexico City concert video is now up for stream online for one week only as the final episode in the five-part series. The videos were unearthed from Aerosmith’s legendary archive for the very first time and remastered in HD from the original master tapes.

Meanwhile, Aerosmith are set to return to live action with a September 4 show in Bangor, ME and a homecoming event at Boston’s Fenway Park on September 8 before the band resumes a Las Vegas residency.

With worldwide sales of more than 150 million records, Aerosmith, formed in Boston, MA in 1970 – were inducted into the Rock and Roll Hall Of Fame in 2001.