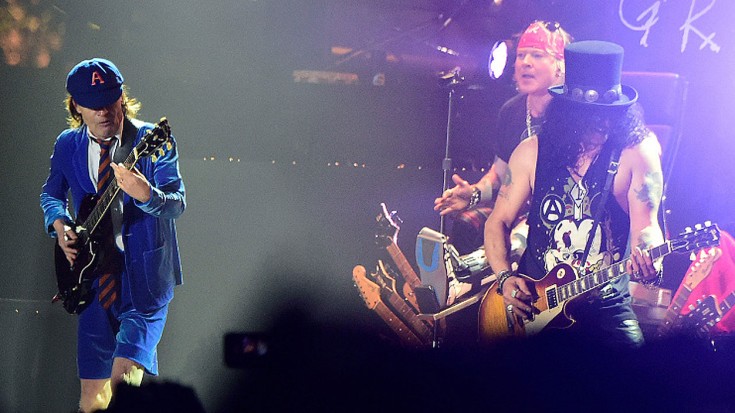 Axl Rose may be confined to a throne for the next few weeks as his broken foot heals, but make no mistake: he’s vocally in fantastic shape and this is the hardest Guns N’ Roses have rocked in years! The only thing missing from Guns N’ Roses’ headlining Coachella act this weekend was Axl’s snake dancing and the energy we saw at the band’s Troubadour show earlier this month and even then, the boys had a contingency plan that kicked in about halfway through their set and brought some serious life to their show – and hinted at how Axl is spending his summer vacation.

“Since I can’t run around for you, we’re going to bring out for a friend to put a little life into things for us,” announced Axl before the big reveal:

Yep, you read that right – AC/DC guitarist Angus Young stopped by to school Guns N’ Roses on how you really rock a festival of that size, coinciding with the news that Axl Rose is, in fact, AC/DC’s new lead singer. Together, Guns N’ Roses and Angus launched into explosive covers of “Whole Lotta Rosie” and “Riff Raff” that not only got the crowd on its feet but gave fans a glimpse at what they can expect to hear this summer on AC/DC’s Rock Or Bust Tour and it’s anything but disappointing.

In fact, it downright rocks; Axl hasn’t sounded this good in decades, and from what we’re hearing in this performance, it’s safe to say that Angus and company made a great choice in recruiting him as their lead singer. Don’t believe us? Check it out for yourself in the footage below, and let us know what you think!