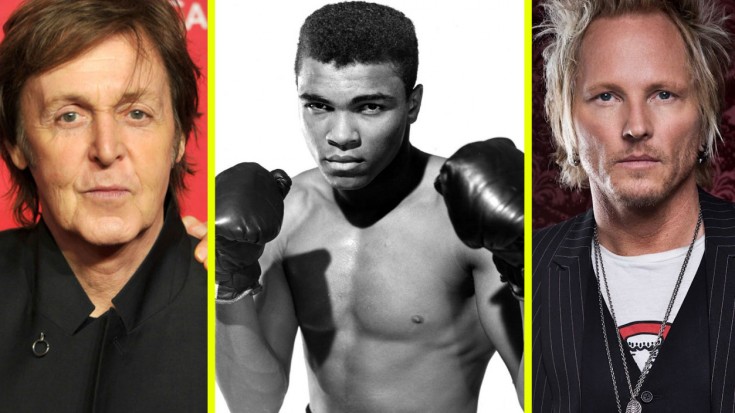 Rock Reacts To The Loss Of A Legend

The world was rocked by the death of “The Greatest,” legendary heavyweight boxer and activist Muhammad Ali. Born Cassius Clay, Ali died on June 3rd at the age of 74 after a decades long battle with Parkinson’s disease, and while news of his death understandably shocked the sports world and fans who remember Ali as a fiercely inspiring, polarizing figure both inside the ring and out, the most moving tributes to his legacy came from a seemingly unlikely source – the rock world.

As tributes continue to pour in in honor of one of the greatest athletes to walk the planet, here’s a look at what 8 rock legends had to say about Muhammad Ali:

Paul on the passing of Muhammad Ali: https://t.co/AfhcmeL4Vqpic.twitter.com/2wuQdrAtJf

God bless Muhammad Ali peace and love to all his family. ?✌️??

The greatest of all time without a doubt. gone! can’t believe it. sad day indeed. pic.twitter.com/RuPhfq6ldV

Rest in Peace Mohamed Ali
You are the greatest there ever was pic.twitter.com/g6gvRFQ25m

Very sad to hear of the passing of Muhammad Ali. He was ‘the greatest’. Our thoughts are with his family & friends. https://t.co/aZJ4aKwOmq