8 Things Only Fans Of Classic Rock Music Will Understand 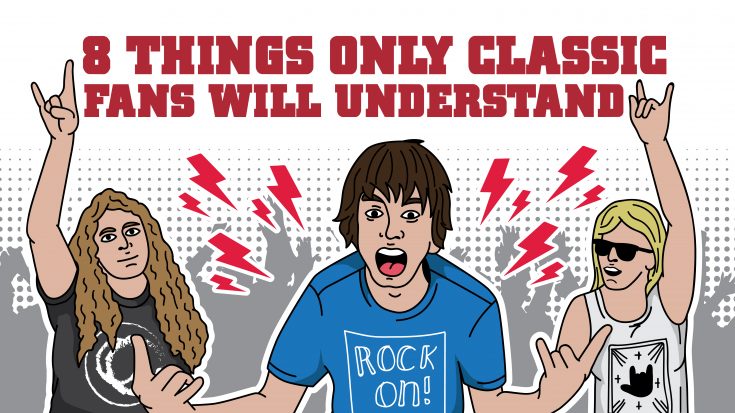 8. Most of today’s music just can’t compare. At all.

A majority of today’s music can’t even hold a candle to classic rock. Let’s be honest here. Artists back in the day wrote their own songs, played real instruments and left us with relevant music that has outlasted generations, rather than one-hit wonders. Nowadays you can hop on a laptop, make some sounds, put a song together with a couple phrases and it seems the young ones will be pleased. Sad. The picture here compares Queen with Beyonce and exemplifies exactly what we’re talking about! Just take a look at the lyrics, the meaning, the art, the deepness. One of these songs will forever live on!

7. Pick Up A Guitar…Not guitar hero

We’ll be the first to admit that Guitar Hero is super fun for entertainment purposes and parties. But at the end of the day, no matter what level you are on Guitar Hero, you are in no way considered a true guitarist. Pressing 5 buttons and pressing up and down on a switch is no where near the challenge of mastering an axe! The game might inspire you to pick up the real thing, and that’s fine, but until you actually start learning a six string, it’s best to just not talk! The good thing is that a lot of classic rock songs are in these videos games so at least the younger ones can get a little schooled up on what real music sounds like.

6. There’s no such thing as less cowbell

Under no circumstances should there be any excuse not to bring in more cowbell! If you have a fever you can bypass the doctor, because the only cure is more cowbell. True classic rockers know this entire sketch word by word, and every time you hear “Don’t Fear the Reaper,” you dance around like Will Ferrell in this bit!

5. It’s completely acceptable to belt “Don’t Stop Believing” at the top of your lungs while you’re drunk

Then again, it’s always acceptable to do this when you’re sober. But during a long night of drinking, this is a necessity. We’ve all been there: it’s 1 am in a bar, everyone is trashed, and this song plays. Every single person goes crazy and starts serenading every lyric to this classic in imperfect, drunken harmony. Also if you’re not singing along, that is a crime against humanity! Look, even Brett Michaels knows what’s up!

4. Air guitar is always acceptable, and is a dance move

Never be ashamed to air guitar. Understand that those who are afraid to air guitar in public are the same people who eat pizza with a fork. They also hate bacon, so never trust them. Air guitar is a part of music, and the lifestyle of a classic rocker. It’s also a completely acceptable dance move, so next time you’re in the club, bust it out and show everyone what’s up! Also, they’re always free!

3. A computer is NOT a necessity for making great music, nor is it an instrument

Computers are wonderful tools. They help create music faster, and allow the artist to experiment with a wide variety of effects and enhancements that weren’t normally available to them. But they should only be used as a tool, and nothing more. An artist shouldn’t use a computer as a crutch, or the sole creator of their music. Pick up a guitar, learn the drums and learn how to control your voice! Don’t let a computer do it for you.

2. World War III Will be started by the Beatles vs. Stones debate

Once this war starts, it may ever end. It’s been debated peacefully for over 50 years now, but eventually that peaceful debate may turn into a full fledged war, and when it does it will be World War III. Both bands are amazing and legendary, but some argue the Rolling Stones edge the Beatles out cause they’ve been around way longer, and others will claim the Beatles made more of an impact in their short time than the Stones have in their 50 years of existence. Whatever side you’re on, just make sure to be safe out there on the battlefield!

1. You don’t need a cell phone to enjoy a concert!

Were there cellphones at Woodstock? No. Did everyone still have lasting memories and a fantastic time? Absolutley. In fact, they probably had a better time seeing the concert through their own two eyes rather than a lens on an iPhone! We’re not saying it’s bad to snap a few pictures during the show, or record a quick clip of your favorite song from your favorite band. But you don’t necessarily have to capture that moment in a picture or video to remember it. You can live in the moment and experience it as it is!

Also, holding up your phone or camera throughout the entire concert is distracting to other audience members and the performer. Other people paid money (sometimes more than you) to experience their favorite band live, and you shouldn’t have to ruin it for them by obnoxiously holding up your phone to get a mediocre photo or video.

Oh, and if you’re texting during the show (unless of course it’s an emergency), that’s just flat out rude to the artist!