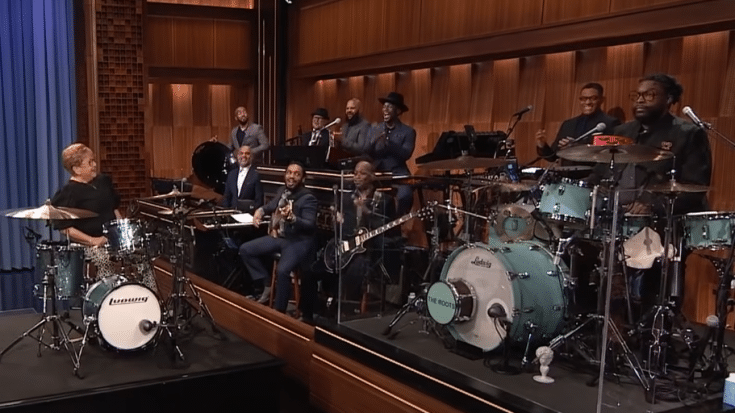 In the continuation of the Nana Week segment on The Tonight Show, Jimmy Fallon introduced Nana Dorothea Taylor to his viewers, a 71-year-old grandma who requested a drum-off with The Roots’ Questlove.

Fallon has been showcasing talented grandmothers each day in the celebration of his children’s book Nana Loves You More. In this episode, Nana Dorothea is a grandma of a 13-year-old “who’s going to be a musician too” she said, and an 8-month-old. She has been drumming for 58 years now.

Dorothea ended up winning the drum-off with Questlove and Fallon requested is she could do the drum solo in Phil Collins’ “In The Air Tonight.” The kick-ass grandma didn’t hesitate and killed the part.

Two years ago, Dorothea went viral when she was featured in Drumeo as the godmother who played a drum cover of Disturbed’s “Down With The Sickness.” She got featured in the same channel for more drum covers after that which earned her fans and supporters all over the globe.

Watch her appearance on The Tonight Show below. Some of the comments read:

“Been a fan of hers for a while now, glad to see her on this stage”

“Dorothea is legendary! Love that she even got the kicks in the Collins solo”

“She is probably one of the coolest grannies and drummers I’ve ever seen!!!!”

“You have got to check Dorothea out on YouTube. She plays really hardcore shit. I found this legend a couple of years ago and she seriously rocks”