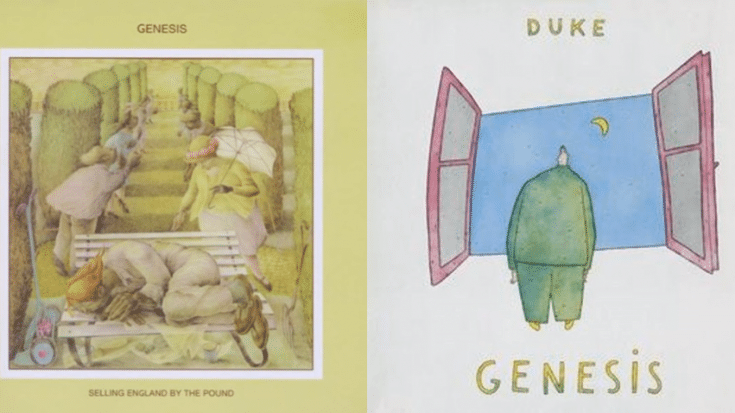 From Prog-rock to Pop

Over the years, Genesis has gotten a lot of flak and mostly from their own fanbase. No matter what the haters and critics say though, they’re one of the most commercially successful groups of all time with total sales of between 100 million and 150 million worldwide.

People are usually divided between two eras – Peter Gabriel’s and Phil Collins’. But instead of these two frontmen, we’d be comparing two decades – the 1970s and 1980s. Which one’s better in terms of sound and albums? Let’s explore each one.

In the ’70s, Genesis was mainly a progressive rock outfit. Most of their material during this period were consistent and in top notch quality. There was also variety – from epics to arena rock. They found their sound and style and at a time when there was no shortage of talented rock acts, Genesis still stood out with their originality. They churned out some of their best albums in the early part of the decade especially with the masterpiece, “Selling England by the Pound.”

But that’s not to say there weren’t a few misses. “…And Then There Were Three…” was the first album sans guitarist Steve Hackett and featured singer/drummer Phil Collins, keyboardist Tony Banks, and bassist/guitarist Mike Rutherford as a trio. It marked a change in musical direction. Overall though, Genesis was a tight unit in the ’70s even when Collins took over as the new frontman and main creative force.

It would not be fair to label them simply as a pop act in the ’80s. Instead of longer songs and experimental music, they moved towards catchy and accessible records. From the arrangements to the lyrics, it was a departure from their releases in the ’70s. Also, they only churned out only four albums in this decade while they had eight in the ’70s.

A lot of people didn’t like how their LPs were overproduced but keep in mind that that was the thing during the ’80s. It wasn’t unusual and they weren’t the only ones who did it. And even though “Invisible Touch” was thoroughly disappointing, “Duke” wasn’t so bad all things considered.

So, which era is better?

We’d definitely go for the ’70s simply because that decade featured both Peter Gabriel and Phil Collins as frontmen. It also boasted of some of their most enduring and spectacular songs. Gabriel’s raw and emotional delivery & Collins’ grit and versatility – they reached their creative zenith in the ’70s.

In hindsight, however, their move towards pop was a necessity to keep up with the changing times. They survived the transition and remained relevant because they subscribed to the trend – not ideal but they did what they had to do. It alienated some of their fans but they also gained new ones.