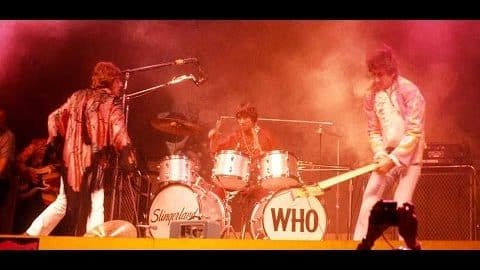 The Who released “Won’t Get Fooled Again” in June 1971, and the single clocked in at over three minutes. The original eight-and-a-half-minute version was featured on their 1971 album Who’s Next.

Here are interesting facts about it:

It was supposed to be for the end of the rock opera. When he didn’t get enough support for it, most of the material ended up on their “Who’s Next” album.

2. It’s about a revolution.

Townshend explained that although it’s antiestablishment, “revolution is not going to change anything in the long run, and people are going to get hurt.”

3. Daltrey wasn’t happy that they shortened it to 3 minutes just so radio stations would play it.

“I hated it when they chopped it down,” he said. “I used to say ‘F–k it, put it out as eight minutes’, but there’d always be some excuse about not fitting it on or some technical thing at the pressing plant.”

4. The Who began to lose interest in singles because of the way the song had to be cut down.

Daltrey explained, “We thought, ‘What’s the point? Our music’s evolved past the three-minute barrier and if they can’t accommodate that we’re just gonna have to live on albums.'”

5. It was the last track on the album and for many years, they used the song to close their concerts.

“It’s interesting it’s been taken up in an anthemic sense,” Townshend told Rolling Stone magazine, “when in fact it’s such a cautionary piece.”

6. Townshend drew inspiration from an active commune on Eel Pie Island in Richmond, London where he was staying at the time.

“There was like a love affair going on between me and them,” he recalled. “They dug me because I was like a figurehead in a group, and I dug them because I could see what was going on over there. At one point there was an amazing scene where the commune was really working, but then the acid started flowing and I got on the end of some psychotic conversations.”

7. During the band’s set at Woodstock, activist Abbie Hoffman interrupted them and Townshend responded by hitting him over the head with his guitar.

“I wrote ‘Won’t Get Fooled Again’ as a reaction to all that – ‘Leave me out of it: I don’t think you lot would be any better than the other lot!'” Townshend told Creem.