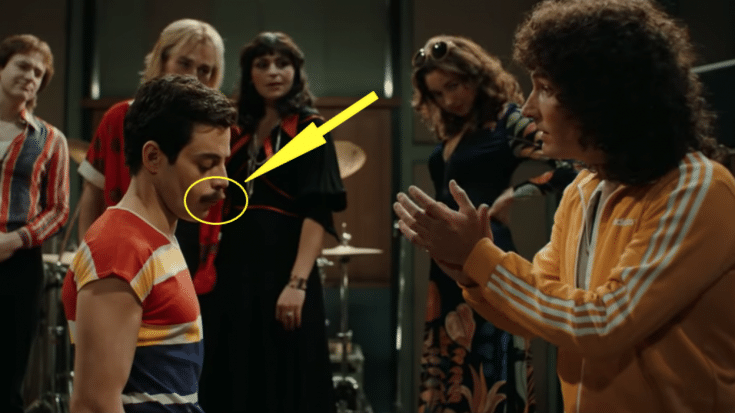 It’s been nearly a month since Bohemian Rhapsody was released, and at the time of this article’s writing it’s on target to become the all-time most popular music biopic. I get it; the film’s been a long time coming for Queen fans who for decades have wanted to see Freddie Mercury’s story played out on the big screen, gory details of his life and legacy laid bare for us to pick apart and form our own conclusions and “what-ifs”.

However, what Queen fans wanted and what Bohemian Rhapsody turned out to be are two beasts of an entirely different nature. After one of the film’s final trailers revealed a glaring continuity error (that I’ll get into below this text) that quite frankly should have been spotted long before it was released, I was a little wary of director Bryan Singer’s ability to tell a story like Freddie’s honestly, fairly, and correctly.

Sadly, after seeing the film I was right; here are 5 of the most glaring mistakes Bohemian Rhapsody got away with that simply couldn’t be ignored:

1. “We Will Rock You” and Rami Malek’s costume

When the world thinks of Freddie Mercury, they think of two things: his voice, and his iconic looks. In fact, if you look at footage of Freddie through the years it’s pretty easy to pinpoint which era of his career you’re looking at based on little things like the way his mustache was styled at the time (if he even had one), the length of his hair, his fashion choices.

Bohemian Rhapsody got this part wrong, and in spades.

The scene that shows Queen fleshing out “We Will Rock You” finds Rami Malek sporting Freddie’s closely cropped haircut and signature bushy mustache...which would have been fine, if “We Will Rock You” had been written in the 80s and not 1977, when Freddie was still rocking long(ish) hair and no facial hair and when this scene in the film took place.

When Freddie was diagnosed with AIDS sometime in 1987, he told only those who needed to know; namely, his bandmates Brian May, Roger Taylor, and John Deacon, who dutifully kept his secret until Freddie announced his diagnosis to the world just hours before his death on November 24, 1991. According to Rolling Stone, he had a close call in 1985 when an AIDS test taken towards the end of year turned out to be negative; he wouldn’t be so lucky when he took a second test in 1987.

Bohemian Rhapsody, however, not only shows Freddie being diagnosed with AIDS in 1985, but choosing to tell his bandmates only days before their highly anticipated Live Aid performance at Wembley Stadium.

Jim Hutton, the strapping Irishman who called Freddie his husband, is as integral to his story as Mary Austin. Hutton, who passed away in 2010, is portrayed in Bohemian Rhapsody as having met Freddie after one of the singer’s legendary parties, working as a waiter when Mercury made an obscene sexual pass at him before ending up talking into the wee hours of the morning.

In actuality, it took three encounters for Jim and Freddie to connect. Hutton revealed in a 1994 interview that the pair first crossed paths at a nightclub where Freddie offered to buy him a drink; Hutton, who wasn’t attracted to Freddie at the time, said no. They met again several months later in a restaurant and finally, 18 months later, when fate brought them together at yet another nightclub, Hutton graciously accepted Freddie’s offer to buy him a drink.

The pair stayed together for the next 7 years, with Jim refusing to leave Freddie’s side until the day he died.

Pretty open and shut case here: Freddie had brown eyes. Rami Malek, the talented actor tapped to portray him, does not.

Why the costume department went to such great lengths to recreate Freddie’s most iconic looks but chose to portray him as having Malek’s natural gray-blue eyes is beyond me, and is more than just a slight oversight on their part.

Bohemian Rhapsody portrays Queen as being totally dependent on Freddie’s talents and contributions to the band, leaving them essentially crippled and not knowing what to do when he embarked on a solo career.

Again, this couldn’t be further from the truth.

Not only were Roger Taylor, Brian May and John Deacon fine on their own, they each enjoyed solo careers while Freddie chased his own dreams. 1983 found May releasing an EP called Star Fleet Project under the name Brian May + Friends, and featured Eddie Van Halen, drummer Alan Gratzer of REO Speedwagon, Phil Chen (session bassist who played with Jeff Beck and Rod Stewart), and drummer Fred Mandel.

Roger Taylor even provided backing vocals for the EP’s title track, and boasted two solo releases of his own – 1981’s Fun in Space and 1984’s Strange Frontier.

John Deacon’s selected solo works include the 1983 7” single “Picking Up Sounds” by Jive Junior and Man Friday, as well as The Immortals’ “No Turning Back,” a single from the Biggles: Adventures in Time soundtrack in 1986.

That being said, Bohemian Rhapsody is still a fun watch if you can get past the glaring mistakes. Rami Malek is absolutely sensational as Freddie Mercury, and for the most part does an incredible job at capturing the mystery and magic that was the Queen frontman.

If you’re a die-hard fan looking for cold, hard facts…this might not be the film for you.