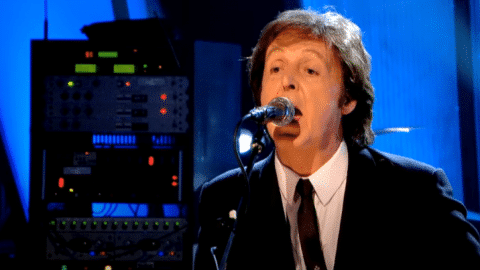 Paul McCartney wrote his best songs while he was still with The Beatles but that doesn’t mean his post-Beatles work was subpar. On the contrary, he still churned out one amazing track after another. Even the pandemic hasn’t slowed him down. Let’s take a look at his greatest tunes post-Beatles:

Band On The Run

One of his most famous songs with Wings, it sold over a million copies in the US alone in 1974. The inspiration was the drug bust of musicians at the time – something Macca could relate with as he’s had legal problems involving pot possession.

“The basic idea about the band on the run is a kind of prison escape,” he told Melody Maker. “At the beginning of the album the guy is stuck inside four walls, and eventually breaks out. There is a thread, but it’s not a concept album.”

Macca wrote this before The Beatles broke up. He played all of the instruments during recording. Featured on his debut solo LP, Maybe I’m Amazed was the highlight of the record.

A James Bond theme song, it was the first rock tune used for the opening of a Bond film. Macca recalled his songwriting process to Mojo magazine.

“I got the book and it’s a very fast read. On the Sunday, I sat down and thought, OK, the hardest thing to do here is to work in that title,” he shared. “I mean, later I really pitied who had the job of writing Quantum Of Solace. So I thought, Live And Let Die, OK, really what they mean is live and let live and there’s the switch.”

A tribute to John Lennon who was murdered in 1980, this served as Macca’s way of dealing with his grief.

“At least once a tour, that song just gets me. I’m singing it, and I think I’m OK, and I suddenly realize it’s very emotional,” Macca told The Guardian, “and John was a great mate and a very important man in my life, and I miss him, you know?”

Jet was the name of Macca’s black Labrador. However in 2010, Macca said that Jet was a pony he owned. A few years later, he explained that the song was about his meeting with Linda’s father.