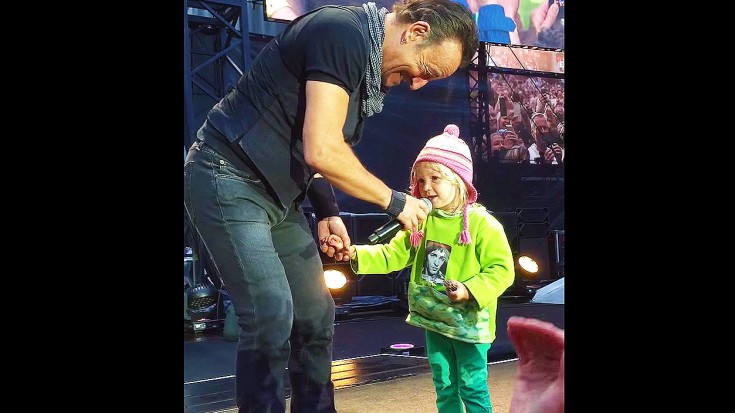 During his June 29th concert at Ullevaal Stadion in Oslo, Norway, Bruce Springsteen and the E Street Band made a 4-year old’s dream come true. The young girl’s name was Hope, who attended the concert with her mother. Her mother was unable to hold Hope up, so throughout the concert, two nearby men took turns holding the young girl on their shoulders so she was able to see the concert. One of those men was Thomas Andersson, who was the original poster of the video which surfaced on Facebook and YouTube.

It all started during the end of Springsteen’s performance of “The Promised Land.” Springsteen strutted the stage and ended the song jamming on his harmonica. As he finishes the song he spots Hope, walks over to her and hands her the harmonica!

Fun Fact: In July 2012 Springsteen played a 33-song, 3 hour and 47 minute set in Oslo, Norway. At the time, it was Springsteen’s second longest concert ever.

Springsteen wasn’t finished yet, however. A few songs later during his performance of “Waitin’ On A Sunny Day,” “The Boss” spots Hope again, but this time, she’s singing along. He once again makes a b-line for her, but this time, reaches out and pulls her onstage for an unforgettable and touching duet of the last few verses. It was a magical moment for the 66-year old Hall Of Fame rocker who looked as if he was fighting back tears, and will truly go down as an unforgettable moment for Springsteen, Hope and the audience!

Watch the moment for yourself below!