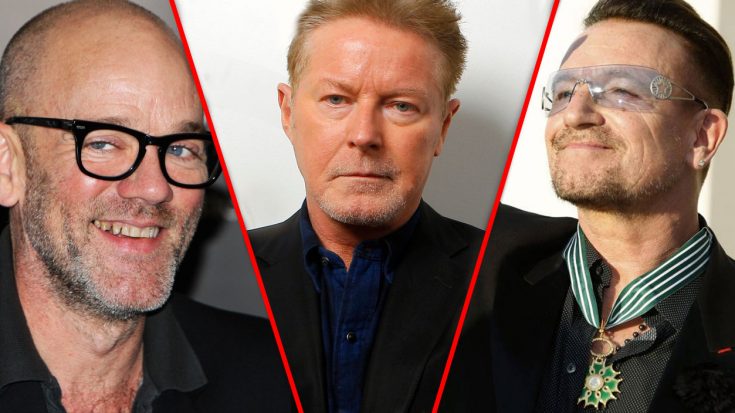 In 1993, MTV capitalized on the inauguration craze following the election of President-elect Bill Clinton by throwing their own inaugural bash. Featuring the talents of Don Henley, En Vogue, Boyz II Men, and 10,000 Maniacs, the evening was capped off by a special one-off performance from members of R.E.M. and U2 called Automatic Baby – a play on each band’s respective albums, Automatic For The People and Achtung Baby – that saw the short lived supergroup perform U2’s “One” to the delight of the audience in attendance.

There was one person who wasn’t thrilled to see Automatic Baby’s performance, and that was former Eagle Don Henley, whose night was effectively ruined when Automatic Baby was tapped to close out the night with “One” following Henley’s set; in his book U2: At The End Of The World, author Bill Flanagan recalls the night in question and the furor caused by the network’s sudden decision to close the show with Automatic Baby:

“[MTV co-founder Tom] Freston goes up to Henley,” writes Flanagan, “and says, “‘Look, Don, you do your whole set, close the show, and then after the applause ends these other guys’ll come out and do ‘One’ as a sign off.'” Henley didn’t buy it. “Henley goes pale – he looks shaken.”

“He reminds Freston that he is supposed to close the show. Then he turns, goes into his dressing room and shuts the door. Freston is left starting at the closed door wondering if he should knock, when someone comes up, hands him a portable phone, and says he has a call. Freston says hello and gets an earful of Irving Azoff, Henley’s powerful manager, telling him he’s made a big mistake and now Don’s not going to go on.”

Understandable – most major acts want to go on last as the headliner of the event, so we see where Don was coming from. Thankfully, he ended up doing the show after all once Michael Stipe and Bono agreed to go on first and let Don Henley close the show out as planned, but somehow we have a feeling that he didn’t include the guys in Automatic Baby on his annual Christmas card list that year!