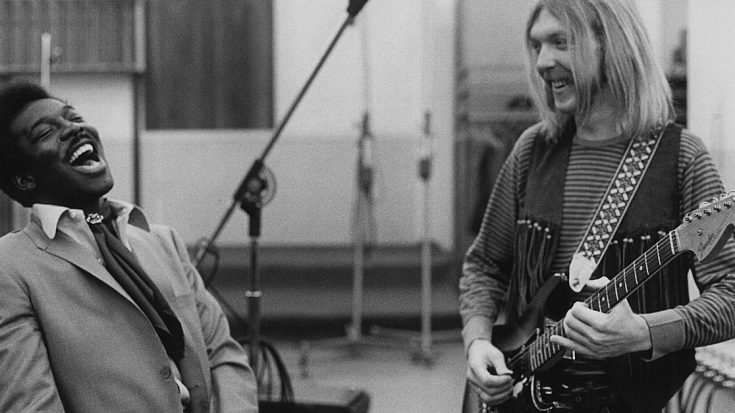 One of the greatest talents the world ever had the misfortune of losing, Duane Allman of The Allman Brothers Band began his career as a session musician, sitting in wherever there was room before his career took off. His once in a lifetime talent as a master guitarist was put to great use when in 1968, he was tapped to play on soul singer Wilson Pickett’s soulful rendition of The Beatles’ ‘Hey Jude’.

The guitar solo that Allman performed on that cover of ‘Hey Jude’ was so incredible that it caught the attention of Eric Clapton, who to this day praises it as Duane’s finest work and one of his favorite guitar solos of all time!

When Clapton first heard Allman’s solo on his car radio, he reportedly pulled over to the side of the road to listen.

“I drove home and called Atlantic Records immediately,” Clapton said. “I had to know who that was playing guitar and I had to know now.”

While Duane Allman’s career was relatively short at only about 5 years before his death in 1971, his impact on the music world and his reputation for being “a real musician’s musician” are unparalleled. For a musician of Clapton’s caliber to be shaken to his very core by a seemingly innocuous guitar solo shows the full extent of Duane Allman’s incredible gift and his ability to put that gift to good use!

“So when I saw him he acted like he knew me, like I was an old friend, ‘Hey man, how are you?’. And he said, ‘As long as you’re here we want you to get on this record and make it with us, we need more guitar players anyway.’ So I did, I was real flattered and glad to be able to do it.” – Duane Allman on Eric Clapton

Just listen to him go – music is pouring out of his fingers!