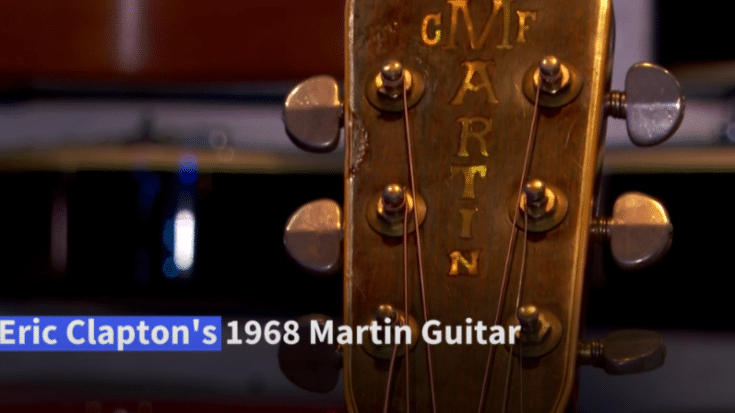 It’s Now One Of The Most Expensive Guitars Sold

Eric Clapton’s 1968 Martin D-45 acoustic, which he used in his short-lived Derek And The Dominos project, sold for $625,000 at Julien’s Auctions’ “Icons & Idols: Rock ‘n’ Roll” sale last week. Its pre-auction estimate was between $300,000 to $500,000. It has become one of the most expensive axes sold at an auction. Clapton used it at the first concert of Derek And The Dominos at the Lyceum Theatre in London on June 14, 1970. He also played it at a show with Delaney & Bonnie and Friends.

The rockstar memorabilia raked in a whopping $5 million! Other top-selling guitars that were auctioned off were owned by U2’s the Edge, Pink Floyd’s David Gilmour, Elvis Presley and Amy Winehouse.

Meanwhile, Clapton has become rather controversial during the pandemic. Aside from collaborating with Van Morrison on his anti-lockdown song, Clapton has repeatedly shared his thoughts on lockdown restrictions, the government’s response to the pandemic, and the Covid-19 vaccines.

“I had been inspired by Van [Morrison] because he came straight out and his reasoning was, ‘We have to make music for people,’” Clapton recently told anti-vaxxer Robert F. Kennedy Jr. “He’s a crusader, he sees it as his calling. And I thought, ‘That’s right, people are not really acquainted with the idea that this is as important in their healing as any kind of medicine. The whole community thing of people with being together with music.’”

“It’s funny, because they can say stuff about me, but I actually haven’t felt physical opposition,” he added. “I’ve felt more support as a result of this than I ever did before about anything.”