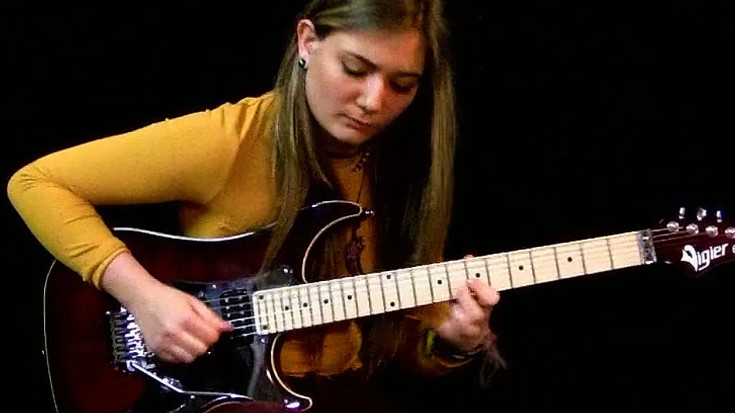 Back again with another killer video is French teen and YouTube shred sensation Tina S., who initially made headlines in 2014 with her cover of Eddie Van Halen’s “Eruption” solo (which, to this day, clocks in at over 13 million hits worldwide). Never one to shy away from the classics, Tina’s tackled everyone from Metallica to Malmsteen, “Comfortably Numb” to “Master Of Puppets” – but today, Tina’s taking on Iron Maiden’s 1983 classic “The Trooper” for what has got to be one of our favorite covers featured on her YouTube account. It’s got everything: heavy distortion for the parts of “The Trooper” that require solid shredding, an incredible solo that begins right at 2:12 that salutes Maiden guitarists Adrian Smith and Dave Murray, and the best part of all – a talented teen having fun doing what she loves.

Tina’s grown by leaps and bounds even since her final video of 2015, and it seems like she’s taken advice given by fans to loosen up and actually let herself enjoy playing guitar and going for some more classic metal that lets her really explore her fretboard; while it’s rare to see Tina crack a smile, the grooving in her seat while playing is enough to let us know that she’s enjoying playing for us as much as we enjoy watching her play!