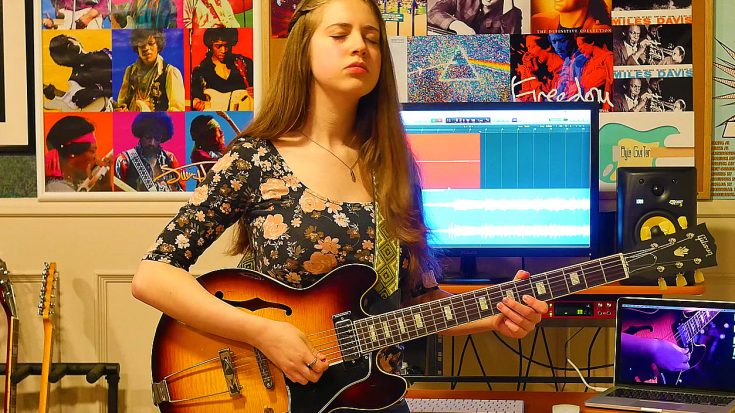 “Got A Black Magic Woman…”

Ayla’s back, y’all, and this time she’s got the blues – blues rock, that is! Coming at you once again from the comfort of her studio, Ayla is armed with her Gibson ES-390 as she tackles Santana’s 1970 interpretation of “Black Magic Woman,” originally written by Fleetwood Mac founder and blues rock guitarist Peter Green, absolutely blowing us away with the amount of feeling she’s pouring into every bend of every string.

At only 15 Ayla’s a cut above her guitar playing contemporaries, understanding that while her technique is rock solid and will take her to some pretty wonderful places, her ability to feel the music and convey that to her audience is even more important; always genuinely in love with her craft, you’ll never see Ayla playing it too cool to enjoy what she’s creating and in fact, I don’t think we’ve ever seen this talented young lady not pour her very heart and soul into her covers.

For her, this isn’t just an opportunity to show off how fleet fingered she is and gain lots of YouTube views in the process, it’s her way of giving back to artists like  Peter Green and Carlos Santana – artists who have inspired her to not just pick up a guitar and play it, but to excel at it and use it as an extension of herself. This young lady is the real deal guys, and you’d do well to keep a weather eye on miss Ayla; we’ve got a strong feeling that we’ll be seeing some great, great things from her in the future.