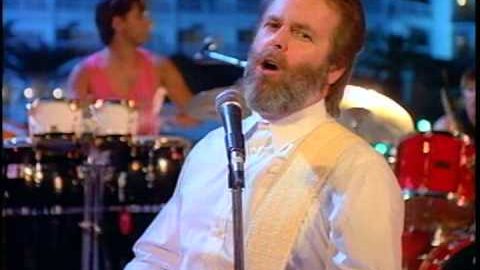 Of course, you’ve already heard the song “Kokomo” by The Beach Boys, but did you know the interesting and some quite funny facts behind the song? We listed down 15 of them, take a look below,

1. Kokomo for Cocktail
It all started when music producer Terry Melcher was hired to work on a song with The Beach Boys for the Tom Cruise movie Cocktail and they were asked to record for the movie.

In a Songfacts interview with Mike Love, he explained how it came together:

So Terry was in the studio doing the track and they didn’t have the chorus yet. They just had a certain amount of bars, but there was nothing going on there. I said, ‘Well, here’s what I want to do.’ And I remember I had told them about the part before. But he said, ‘Uh huh. How does it go again?’ So I literally, over the phone – he was in the studio and I was on the phone – sang [deadpan slow recitation]: ‘Aruba, Jamaica, ooo, I want to take you.’ So he’s writing that down, and I’m singing it in the scene, the notes, and the timing of it in tempo to the track.”

No, it wasn’t Brian Wilson, in fact, he had nothing to do with this song. At that time, Wilson had already released his first self-titled solo album and came out with the first single, “Love And Mercy,” three weeks before “Kokomo” was released.

The real brains behind the song is Love in collaboration with Melcher as well as John Phillips of the Mamas and the Papas.

Regarding the composition of the song, Love said:

“The verses and the verse lyric was written by John Phillips of the Mamas and the Papas. He wrote ‘Off the Florida keys, there’s a place called Kokomo, that’s where we used to go to get away from it all.’ I said, ‘Hold on. We used to go sounds like an old guy lamenting his misspent youth.’ So I just changed the tense there. ‘That’s where you want to go to get away from it all.’ So that was the verse. And it was very lovely. But it didn’t have such a groove, I didn’t feel.

So I came up with the chorus part: ‘Aruba, Jamaica, ooo, I want to take you to Bermuda, Bahama, come on, pretty mama. Key Largo, Montego…’ That’s me, the chorus and the words to the chorus was Mike Love. The verse was John Phillips. The bridge, where it goes, ‘Ooo, I want to take you down to Kokomo, we’ll get there fast and we can take it slow. That’s where you want to go, down to Kokomo,’ that’s Terry Melcher. Terry Melcher produced the Byrds and Paul Revere & the Raiders, very successful producer. But he actually produced that song and he wrote that bridge part, which Carl Wilson sang beautifully. And I sang the rest of it. I sang the chorus and the verses on that particular song.

I don’t know what Scott McKenzie’s involvement was, I honestly don’t, because all I know is John Phillips, Terry Melcher, and myself put that song together, all those different elements.”

3. Is Kokomo a real place?
Phillips thought the name sounded good and wanted to use it for the title, but he pictured Kokomo as a place off the Florida Keys. However, there are several Kokomo in different places. There are a Kokomo Charters in Sarasota, a Kokomo city in Indiana, a Kokomo in the Fiji Islands and a community named Kokomo in Hawaii, but no Kokomo in South Florida where the music video was filmed.

4. The session musicians
The Beach Boys are known for their vocal harmonies, but session musicians often played the instruments on their albums. The same thing happened with “Kokomo.” Jim Keltner was brought in to play drums and Ry Cooder was hired on guitar. Keltner has played on albums by George Harrison, Bob Dylan and Elvis Costello. Cooder has worked on many film soundtracks and has played with John Hiatt, Captain Beefheart and Taj Mahal. The session musicians were not credited.

5. Parks on the track
Van Dyke Parks was called in to help record the song. He worked closely with Brian Wilson and was a big part of the “Smile” project, an album Wilson worked on when he was going through drug addiction and severe mental problems. Having Parks at the sessions made it more of a legitimate Beach Boys song: he arranged the steel drum band and played accordion on the track.

6. Kokomo before the film
The song was released in July 1988, but it went nowhere until the movie came out a few months later and made it a huge hit. When The Beach Boys played it live during concerts that summer, it got no response. The single was released with the original version of Little Richard’s “Tutti Frutti” as the B-side.

7. Kokomo after the film
The Cocktail soundtrack was very successful. Before “Kokomo,” the last US #1 for The Beach Boys was “Good Vibrations” in 1966. At 22 years, it was the longest any act had gone between US #1 hits until Cher topped the charts with “Believe” in 1999.

8. Kokomo have gone popular
When the song became a hit, many companies capitalized on the “Kokomo” name, which as a result of the song, implied relaxing fun in the sun. A resort named “Kokomo” popped up on the southern tip of Florida on an island called Grassy Key, like the song says, “Off the Florida Keys,” there have also been restaurants and bars with that name.

9. Other “Kokomos”
The Beach Boys’ Kokomo is not the only Kokomo in existence of all Kokomos. There are other songs titled as the same name, but each has a total different meaning.

The composer Jimmy Wisner went by the nom de plume Kokomo and reached #8 US in 1961 with an instrumental called “Asia Minor.” That same year, the vocal group The Flamingos hit #92 with a song called “Kokomo,” where it’s the name of a girl, not an island. In the ’70s, there was a British soul group called Kokomo whose biggest hit was “I Can Understand It.”

10. The Muppets wants to go to Kokomo
The Muppets did a version of this song. The plot was that Miss Piggy wanted to know if there could be anywhere more perfect than where they were, and Kermit starts in about how he’d love to go to Kokomo, with Miss Piggy sighing periodically as backup. It was supposed to be a Muppet Summer love song.

According to Stamos, the music video was done in two takes at the Grand Floridian beach resort, which had not yet opened to the public. The cast and crew were some of the first guests to stay there.

14. Chandler sings Kokomo
In the season 8 Friends episode “The One Where Rachel Tells…” Chandler sings part of the song as he and Monica prepare to leave for their honeymoon.
15. Steve Carell sings Kokomo
Steve Carell sings this song to calm himself down in the pilot episode of the 2020 Netflix series Space Force. It was also used on these shows:
The Goldbergs (“The Most Handsome Boy On The Planet” – 2014)
Happy Endings (“Grinches Be Crazy” – 2011)
Family Guy (“The Tan Aquatic with Steve Zissou” – 2007)
The King Of Queens (“Pour Judgment” – 2005)
Chicago Hope (“Quiet Riot” – 1996)
Previous
Share on Facebook
Share on Pinterest
Next