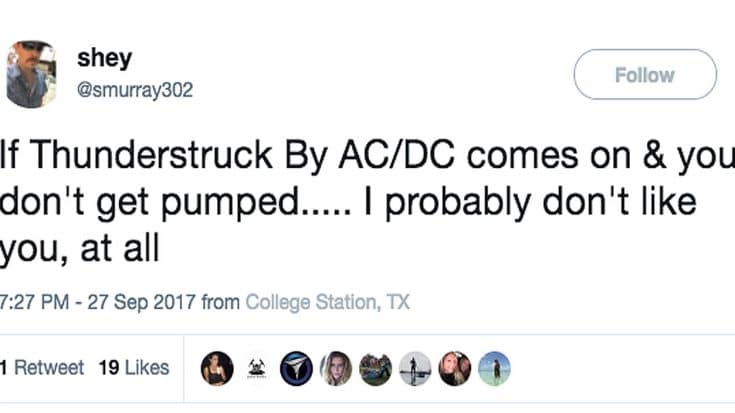 If you think megadeth is better than metallica idk how serious I can take you.

2. I wonder if this girl had the Kardashians in mind when making this Tweet???

3. Good question. And what about One Direction, for that matter!?!

#GeneSimmons charging $25K-$50K for customized meet n greet? Hard pass! Got all my stuff signed years ago for free when he wasn't a douche.

5. Can we get Mark an award for funniest Tweet of the day!?!

The gene Simmons one gave us gene singing when you wish upon a star, and for that it's going to hell

6. I have never agreed more with a Tweet in my life than I do now…

If Thunderstruck By AC/DC comes on & you don't get pumped….. I probably don't like you, at all

7. Seriously though, ladies… Is it even worth it?

is he even worth it if his jawline doesn’t look like jim morrison’s?

8. If Kurt Cobain was alive today, I’m pretty sure that Sony Pictures would attempt to make this concept into alive action summer blockbuster. I’d go to see it!

9. What do you guys think? Can you all still STAN Guns ‘N Roses?

10. I’ve used this excuse before… Needless to say it didn’t work…

Told my boss I was late bc Green Day was on the radio so I couldn't leave my truck, she then asked what Green Day song is 45 minutes long? 😬

11. I mean… They’ve been around for 34 years and they’re in the R&R Hall Of Fame. They’re pretty much classic rock, right!?!