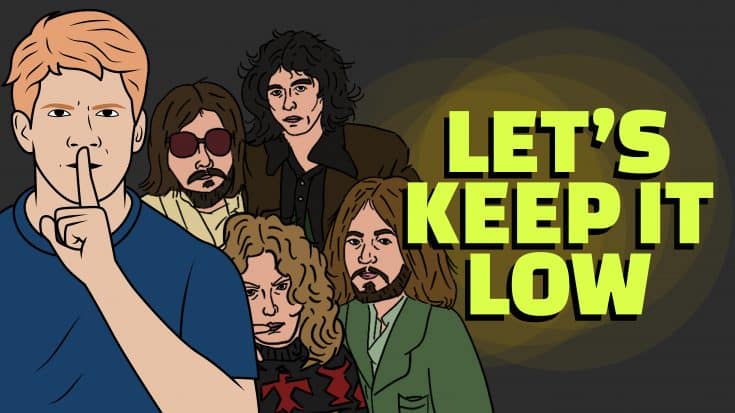 The Other Side of Rock ‘n Roll

Led Zeppelin dominated the golden era of rock ‘n roll. With their brand of hard rock, they churned out albums that are unrivaled in terms of songwriting, musicianship, and overall quality. But at the height of their fame, they partied harder than any other band.

Here are the most upsetting and controversial stories about them:

This is according to Led Zeppelin’s favorite groupie Pamela Des Barres. She wrote in her book “Rock Bottom” that Page liked donning a Nazi uniform. He also visited transvestite clubs in every city they played and took drugs with drag queens in the bathroom. When it got too much, their tour manager would chain him to their hotel room toilet.

10. Page was cursed by the filmmaker Kenneth Anger.

They met at a Sotheby’s auction in 1973 when they both made a bid on an Aleister Crowley manuscript. Page even invited him to the Boleskine House which once belonged to Crowley. At the time, Anger was working on his short film titled “Lucifer Rising” and he asked Page to write the soundtrack for the movie. Page said yes and allowed Anger to use some of his equipment for the filming. Page gave him 20 minutes of music but he wanted 40.

Anger told The Guardian, “He’s a miser, which is a horrible thing. He wouldn’t even pay for lunch. So I said: “Isn’t it preposterous that you’re so cheap?” And that of course insulted him. He was on heroin all the time – I hate all those druggies because their eyes get glazed and what they say is meaningless because they don’t follow through. I said: “OK, Jimmy, I need exactly 40 minutes.” But he only gave me 20. I said: “What am I supposed to do, play it twice? I need 40 minutes! I need a climax! Like, [the film] is the end and the beginning of the world – you’ve gotta give me that big music!””

And Page’s then-girlfriend Charlotte Martin kicked Anger out of the basement. So Page and Anger had a falling out and the latter publicly cursed Page and Martin.

Anger claimed, “He’s a multi-millionaire miser. He and Charlotte, that horrible vampire girl… They had so many servants, yet they would never offer me a cup of tea or a sandwich. Which is such a mistake on their part because I put the curse of king Midas on them. If you’re greedy and just amass gold you’ll get an illness. So I did turn her and Jimmy Page into statues of gold because they’ve both lost their minds. He can’t write songs anymore.’

9. Plant’s son died suddenly while they were on a US Tour.

It was in July 6, 1977 when Plant received a call from his wife that his five-year-old son Karac passed away from a stomach infection. Tour manager Richard Cole recalled, “The first phone call said his son was sick. And the second phone call, unfortunately, Karac had died in that time.” Plant told Rolling Stone, “I lost my boy. I didn’t want to be in Led Zeppelin. I wanted to be with my family.” He actually considered leaving the group but Page wouldn’t let him and during those dark days, it was drummer John Bonham who stayed close to him.

8. In the ’70s, Page stopped going to the Boleskine House because of “bad vibes”.

Page bought Boleskine House which was located in the Scottish highlands but he visited it only a few times. It belonged to occultist Aleister Crowley in the late 1800s. Page claimed that there were “bad vibes” in the property and he apparently heard a severed head rolling on the floor – possibly that of Simon Fraser, 11th Lord Lovat. Page then asked his childhood friend Malcolm Dent to be its caretaker up until Page sold the manor.

Dent told Inverness Courier in 2006 that he lived happily in that place with his family. But he also admitted, “Doors would be slamming all night, you’d go into a room and carpets and rugs would be piled up.” And when doors would suddenly spring open, Dent said “We just used to say that was Aleister doing his thing.”

7. Page greeted groupies with nothing but whipped cream on him.

One time, they got so bored that Bonzo dressed up as a waiter and wheeled a naked Page covered in whipped cream on a room service cart into a room full of girls.

6. Bonham rode his motorcycle through a hotel hallway.

He took his Harley Davidson down the Chateau Marmont lobby and basically destroyed the carpet. It was held together by a tape and when Andre Balazs bought the hotel in 1990, that was the first thing they replaced. This wouldn’t be the only time he pulled that motorcycle stunt as he also did the same thing at the Continental Hyatt House Hotel and the Andaz West Hollywood.

5. Bonham had forty shots of vodka in his system on the night he died.

He began drinking at Page’s home in Windsor Berkshire, England and it went on for 12 hours straight. After midnight, he fell asleep on the sofa and an assistant put him to bed and added pillows for support. Tour manager Benji LeFevre and John Paul Jones found him unconscious the next day. He passed away at 32 years old.

4. Their mud shark incident became the stuff of legends.

It’s one of the wildest stories in rock ‘n roll. It took place at Seattle’s Edgewater Inn in July 1969 where the band members of Led Zeppelin and Vanilla Fudge allegedly defiled a groupie with a mud shark caught outside their window. In the unauthorised Zeppelin biography Hammer Of The Gods, author Stephen Davis wrote: “A pretty young groupie with red hair was disrobed and tied to the bed. Led Zeppelin then proceeded to stuff pieces of shark into her vagina and rectum.” Led Zeppelin neither denied or confirmed that this actually happened and over the years, there have been several versions of the story.

3. Years after the mud shark incident, they went back to the hotel and tossed out the television sets.

In 1977, Led Zeppelin checked into the Edgewater Inn again and somehow found a way to skirt around their lifetime ban. According to the hotel manager, they didn’t use their real names and so the staff couldn’t kick them out when they were already there. There were no mud sharks this time but they had another means of amusing themselves – by tossing out not one but five television sets out the window and then watching as it bobbed in the water. No one noticed until it was time to check out.

The head housekeeper called the manager and told him that the hotel rooms were still in good condition but the TV sets were gone – all of them in five rooms. When the manager went into the rooms and looked out the window, he saw the TV sets floating in Puget Sound. Led Zeppelin was charged an additional $2500.

2. They ripped off the clothes of a female reporter.

One time, a female journalist from Life magazine was sent to profile Led Zeppelin. They ended up attacking her and tearing off her clothes. She was reduced to tears, fearing for her own safety until she was saved by their manager Peter Grant.

According to Lori Maddox, Page asked one of his roadies to escort her to his room at the Hyatt House. She was just 14 years old at the time. Their affair lasted for years and Page did his best to keep it hidden for fear that he will be accused of statutory rape and end up in jail. In a 2015 interview with Thrillist, Maddox revealed that she lost her virginity to David Bowie whom she dated months before Page.