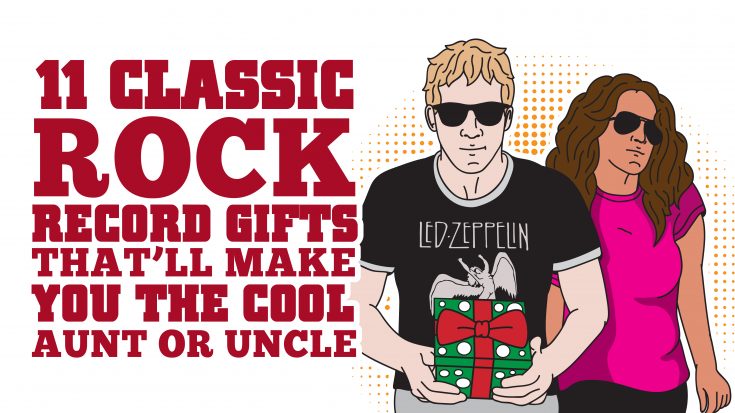 No matter what the occasion (birthdays or holidays), giving old school vinyl records will always be the perfect gift. That is, if your niece or nephew has the same cool music taste as you. If not, lead them away from trashy songs and give them something priceless: the discovery of classic rock.

P.S. You can pair these with portable records too!

This, kids, is proof that classic rock isn’t just for “old people.” Great music transcends time. But of course, if you don’t want to go into any mushy speech or dedication, you can just make them listen to it themselves. This is one of the most revolutionary and innovative albums ever recorded and the younger generation needs to understand what real music is like. The amount of creativity and experimentation resulted into something no other band can even come close to. Soon enough, you’ll hear your nephews or nieces singing “Yellow Submarine,” “Eleanor Rigby,” or “For No One.” This is a good introduction to The Fab Four and one that the neighbors wouldn’t mind if you crank this up really loudly. It’s an absolute masterpiece and you shouldn’t be surprised if they suddenly prefer listening to classics such as this from now on. There’s nothing better than vinyl records, not even music streaming.

Led Zeppelin was a league of their own. This album will make anyone want to learn how to play musical instruments – whether it’s guitar, bass, or drums. And of course, attempt to reach the high notes Robert Plant effortlessly belts out to. The group fused blues and rock seamlessly – like they were meant to be blended from the start. With classic hits like “Dazed and Confused” and “Good Times Bad Times,” it’s every music lover’s fantasy to play like any of them. In one interview, Page shared that they only spent 36 hours in the studio to complete this brilliant musical masterpiece. Here’s a fun fact: the recording cost them a measly £1,782 but the total gross was £3.5 million. Lewis wrote: “Time has done nothing to diminish the quality of one of the finest debut albums ever recorded. There’s an urgency and enthusiasm about their performance that retains timeless charm. The nine cuts offer a tour de force of powerful yet often subtle dynamics … And let’s not forget the fact that with this album, Page virtually invents the guitar riff as a key songwriting component.” Yep, if you still don’t have this record, you need to buy now.

Never let any opportunity to introduce kids to Pink Floyd pass up. This is your chance to make classic rockers out of them. It’s a musical gem that deserves to be listened to by every single generation, today’s kids are no exception. You can pair this with videos of their tour so you can show how the band is way ahead of their time. The elaborate effects during their concerts are so visually appealing any gigs today would hold no candle to this creative bunch of guys. Anyone who likes stories will surely fancy this one. With themes of isolation and abandonment, it might be a bit dark and gloomy but it’s utter perfection. The music, the lyrics – everything about this is like a gift from the rock gods. Kurt Loder from the Rolling Stone magazine wrote that the album is “a stunning synthesis of Waters’s by now familiar thematic obsessions.”

This is the sure fire way of becoming the best aunt or uncle in the whole universe. There’s nothing more that screams “coolest” than giving them one of AC/DC’s best albums. Thanks to their explosive performance at last year’s Grammy Awards, their headlining the Coachella 2015 and of course, their reunion tour – it won’t be so hard to convince today’s kids that this band absolutely rocks. Besides, the group is still making noise because of their shows and of course, the new temporary vocalist. But “Back in Black” is just on another level. It’s powerful, raw and edgy. And it’s absolutely bad ass! It has some of our favorite AC/DC tunes like the title track, “Hells Bells,” “Shoot To Thrill,” and “You Shook Me All Night Long.” It’s like a musical heaven for those who like hard rock. So be a nice relative and give this record as gift – anyone will love it.

Niece or nephew – this will make anyone fall in love with Fleetwood Mac. We bet they’ve heard some of these songs before just maybe from another artist who did a cover version. It’s not uncommon, really, given that these classic hits sound great in acoustic or pop form. But kids need to know about the existence of this album for the simple reason that it’s among the greatest rock piece ever produced and with cool songs to boot. Besides, anyone can relate to some of the heartbreaking tracks. “Dreams,” “Go Your Own Way,” and “The Chain” are just some of those we like to put on repeat. Man, Stevie Nicks has so much soul you can almost feel her pain. If your niece is into music festival fashion, you can share Nicks’ photos showing that she has a penchant for amazing outfits. And well, today’s girls need to thank her for her influence.

The Who were so badass they could get away with smashing guitars and putting explosives on drums on national television. This will be your subtle way of saying classic rock isn’t boring AT ALL. Everyone needs to know about the legend that is Keith Moon who is an absolute beast behind the kit. But how can we forget John Entwistle, Roger Daltrey and of course Pete Townshend? Don’t you just feel sympathetic to people who have never even heard of them and their music? It’s like missing half of your life. So, do your nieces and nephews a favor and make them listen to “Pinball Wizard,” “My Generation” and “Baba O’ Riley.” They need to discover this powerhouse rock act because frankly speaking, there’s nobody like The Who. Just ask those who were lucky enough to be there during their concerts – it’s so dang loud at one point they held the record for ‘loudest band in the world.’

You can be like, “You know that guy who broke his foot and borrowed Dave Grohl’s throne? Well, let me introduce you to their magnum opus.” This is Guns ‘n Roses at their absolute best. “Welcome to the Jungle,” “Paradise City,” and “Sweet Child O’ Mine” are all here. It contains most fan favorites and it’s hard to finish this record and not put it on repeat. No amount of digital downloads and streaming can ever come close to listening to vinyl. And these classic rock bands on this list didn’t just spend their time creating music, they also managed whip up the best-looking (and sometimes controversial) album artworks ever. Do you still remember that “browsing” albums meant going over these awesome covers as well and it’s a lot like flipping the pages of your favorite book. You should share the same experience. Besides, even some millenials are going back to using vinyl records today.

Most of these teens and kids today, when you ask them about ‘70s music, they’d likely think “old, mellow, cheesy love songs.” Well then, show them this. It’s one of those records you’re extremely proud of having. And somehow, we always find the need to ‘share’ this kind of music. You tell the younger generation that hard rock isn’t all bad makeup and tight leather pants. Although to be fair, we like that outfit too. Does that make us look so old now? Lol. We can’t emphasize enough how much we love this record. It was successful commercially and even until today, the songs are staples in classic rock radio stations. They also found massive success with their tours. According to promoter Bob Bagaris, “I sold out arenas with this group in four cities from Lincoln, Nebraska to Louisville, Kentucky. I’ve never seen such universal penetration of key secondary markets by any major group. Even the biggest acts usually don’t do so well in every market.”

Anyone who receives Metallica records as gifts immediately becomes the luckiest person in the world. An added bonus is if they receive the band’s tour de force. This is how you do heavy metal. “Enter Sandman,” “The Unforgiven,” and “Nothing Else Matters” are just some of our favorite tracks. These are all timeless pieces. While we love ‘Master of Puppets’ too, we think this is the best way to introduce the band to youngsters. Especially with their new album, it’s never a bad idea to go back to where they started. We’re also pretty sure these kids have heard these songs and even sang them during karaoke. Or they might be familiar with the band’s name because there are Metallica shirts everywhere and even worn by celebrities. On second thought, that would be an awesome pair: Metallica vinyl record and a kickass graphic shirt of the album cover. Kids would go nuts!

It’s one of those “Don’t tell your mom” moments. The title alone is enough to earn you a scathing glare or a meaningful “We need to talk.” Well, that is unless their parents are as cool as you. You see, this is what OUR parents warned us about – rock is evil. But, Meat Loaf’s “Bat out of Hell” is widely regarded as one of the most iconic and influential albums of all time. And if you want kids to start loving classic rock, then you can’t skip this one out. Although this is always being compared to Bruce Springsteen’s “Born To Run,” composer Jim Steinman said “Springsteen was more an inspiration than an influence.” He further claimed that the songs were not autobiographical, “I never thought of them as personal songs in terms of my own life but they were personality songs. They were all about my obsessions and images. None of them takes place in a normal world. They all take play in extreme world. Very operatic … they were all heightened. They don’t take place in normal reality.”

You know the easiest way for kids and teens to remember who Jon Bon Jovi is? Tell them it’s the hot guy who played Jensen in the 2011 film “New Year’s Eve.” Anyway, this record is what propelled Bon Jovi to the top. They proved the boys weren’t just a bunch of one-hit wonders. The album contained smashing hits like “You Give Love A Bad Name,” “Livin’ On A Prayer,” and “Wanted Dead or Alive.” And dang, perhaps another factor was because Jon Bon Jovi was easy on the eyes. How can anyone have such fabulous hair? During an interview in 2013, he shared: “That was our Thriller. That was our Born in the U.S.A. That was our defining record, the one that they’ll write about when we’re dead. And it’s very hard to live up to that success, no matter who you are. But I have no problem looking back on ‘Livin’ on a Prayer,’ ‘Wanted Dead or Alive’ and ‘You Give Love a Bad Name’ and saying, “Yeah, they’re still a part of the set. They’re still a part of the patchwork of pop culture.”