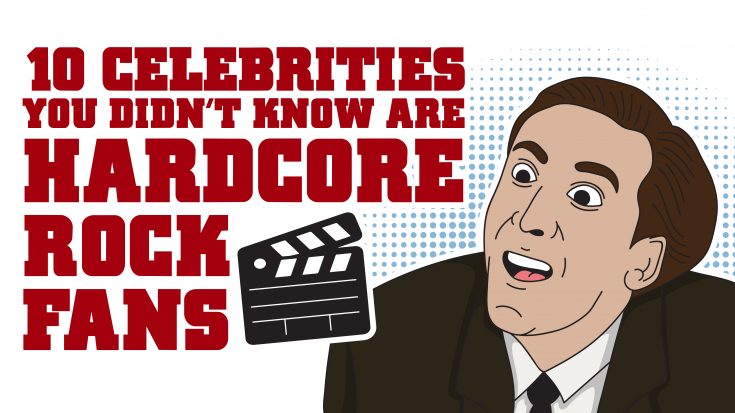 Hollywood’s new Harley Quinn Margot Robbie turns out to be an ultimate metal head! The newest Harley Quinn from the new blockbuster Suicide Squad is already as punk rock as she is but the Aussie actress reveals she’s more of a Maggot than a Margot, much to the surprise of everyone. She has admitted to going through the rebel teenage phase of dying her hair black, cutting it with a razor blade, and being obsessed with “the heaviest of heavy metal”, which included Silverstein, Bullet For My Valentine, Metallica and, yes, Slipknot. In fact, Robbie drew inspiration for her character Harley Quinn’s look from a legendary female rock star – Debbie Harry from Blondie. Margot Robbie says:

“I tried on like 100 different variations of the costume but when I saw a picture of – we found this picture of Debbie Harry – and I was like, ‘That’s it, that is dope.'”

She also fangirls over Slip Knot on The Tonight Show with Jimmy Fallon saying that attending a Slip Knot live show was “the best concert I’ve ever gone to”. She adds, “They’re just amazing performers. Even if you don’t like metal, I think you’d appreciate a Slipknot concert.”

You’d never guess that this Charlie’s Angel is a hardcore rock fan. Cameron Diaz, more known for her sultry looks and action packed movies was actually a headbanging rocker teenager. She said, “I banged my head quite a bit. I liked everything from Iron Maiden to Ozzy to AC/DC.” Diaz has also admitted that she used to go for guys who had long hair and wore make-up. Another requirement to score a date with her: must love rock. Those dudes would also need lose themselves in banging their heads to her favorite bands Whitesnake and Iron Maiden. Basically, teenage Diaz preferred the grungy make-up-wearing rock music-loving dudes than the hunky leading men she has dated in Hollywood. We say she’s definitely got a refined taste in music…and dating.

She may be one of the sexiest young women on earth, but Hollywood actress Megan Fox is true hard rocker at heart. It’s actually not too shocking this tattooed black-haired beauty known for her rebellious and provocative roles is a heavy rock music fan. The actress, most famously associated with the “Transformers” film series, is not just always seen sporting cropped iconiac rock band tees but is actually wearing them beyond the trend and into legit fandom. Fox has revealed she was raised in a home that blasts Nirvana, Megadeth, and bonkers sleaze-rockers Mötley Crüe. That just made her more sexy than she already is – being not only just a mighty hot fine-looking woman, a hypnotic seductive actress, but also a true rocker with the greatest taste in music.

British actress and model Rachel Weisz is more known for being a treasured English rose so to find out that Academy Award winner is a self-proclaimed “old mosher” may come as a shock for many. She has revealed that she is avid ’80s metal fan and a frequents rock concerts quite a bit, saying, “Oh yah, I’m definitely an old rocker. I go and see music all the time.” It’s quite an astonishing revelation that she head bangs to the greatest vintage ’80s rock classics, perhaps a but of Poison, AC/DC, Guns N’ Roses, even Van Halen! No wonder James Bond actor Daniel Craig fell in love with the British beauty. They say find a woman who can do both sweet and spicy, and we say with Ms. Weisz’ awesome taste in music, it’s no wonder why so many got the hots for her.

Academy Award winning actor Nicolas Cage has already made a name for himself for appearing in countless memorable roles. The closest thing he played to being a rock enthusiast, however, was a flaming skull on a motorcycle in “Ghost Rider”. And maybe when he had a headbanging party as a priest in Face/Off. As it turns out, the movie star is actually a metal head! His 21-year-old son, Weston, even takes after his love of hard core metal rock music. Weston Coppola Cage is the lead singer of a black metal group called Eyes of Noctum. According to Cage’s son, his famous father enjoys black metal, saying

“He’s really appreciated that sort of music. Him and I have had conversation about black metal before. At first he was like “what does it promote?” and I just gave him an idea of what we’re trying to do and he said “Well that sounds very honest … He likes Darkthrone and he likes Satyricon, as well.”

Everybody knows Jimmy Carrey for being a worldwide comedy icon. But we’ve been shown his dark side, of you will, in an unforgettable scene in 1994’s “Ace Ventura: Pet Detective”. In one of Carrey’s most iconic movies, he chose the metal group called Cannibal Corpse to perform their classic “Hammer Smashed Face” in one of the scenes and is actually great friends with the former lead singer of this group, Chris Barnes. Aside from Cannibal Corpse, some of his faves also include Deicide and Napalm Death. He even had a fanboy moment over the band he invited to the movie during an interview even mouthing lyrics to the band’s songs.

Interesting fun fact: there’s a deleted scene where Jim Carrey actually gets up on stage with the band! Now that’s something we’d like to see!

If there’s anyone who has made classic rock cool again to the kids of today, it’s gotta be Iron Man himself, Robert Downey Jr. With sporting the most rad iconic Rock and Roll band t-shirts in his movies promoting the classics to the younger generation, and of course, having an almost all-classic rock sound track to the Iron Man franchise, life imitates art in terms of musical taste. Downey Jr. is scarily like his character Tony Stark in so many ways but most interestingly, his love for classic rock music such as Black Sabbath ( I mean, they did release the original “Iron Man” song), AC/DC, Metallica, Pink Floyd, and Iron Maiden. He’s also a musician and singer himseld, having released his own album “The Futurist” in 2004. He says his musical influences include Van Halen and Kings of Leon.

Who would’ve thought the young prince of England prefers hard rock music to the stereotypical classical instrumental tunes books and movies let us think are associated with royalty. It’s unexpected but highly refreshing to find out that Prince Harry digs some hard core Metallica, Megadeath, and Slayer as revealed by his actor mate Dominic West. The actor discovered this little fascinating factoid about the young prince while they were both on a Walking With The Wounded charity expedition to the South Pole as celebrity patrons. As Prince Harry is a soldier, West connects that his love for rock came about when he joined the army, as he has generalized that it is the music soldiers listen to. Makes you wonder if the Queen approves of his grandson’s loud tastes and asks to turn down the volume in the palace.

Oscar nominated Irish leading man most famous for playing the young Magneto in the newest X-Men films is a big Metallica fan. He says,

“Metallica was a big influence on me, when I was growing up, music kind of defined your group, you know.”

He was even in a heavy metal band when he was a teenager. Fassbender’s shared an anecdote about his childhood dreams during his appearance on “The Tonight Show”, saying, “I wanted to be a musician, I was into heavy metal, I wanted to be a lead guitarist in a heavy metal band. I loved Iron Maiden, Metallica, Slayer. Unfortunately, his band playing days were short lived as they only ever played one gig at a little pub in rural Ireland. They played in front of a crowd of middle-aged people who, as cliche as it is, told the wanna-be rockers to just turn the volume down,

Sir Christopher Lee was a very seasoned, highly revered veteran actor who was most famously known as the ultimate villain having played classic sinister characters such as Dracula in 1958 and Saruman the White in the Lord of the Rings franchise. It wouldn’t be so surprising to know that he would like darker more sinister music but what would be more of a shock is that he himself released his own metal album at the tender age of… 92! Yes, Sir Christopher Lee fulfilled his musical dreams by releasing “Charlemagne: By the Sword and the Cross”, a symphonic metal concept album in 2010. Prior to that though, he was famously a big Black Sabbath fan and has released Christmas EPs with a darker metal twist such as “Darkest Carols, Faithful Sing,” a much different take on the old classic “Hark! The Herald Angels Sing.”