10 Times Geddy Lee Proved Bassists Can Be A Frontman 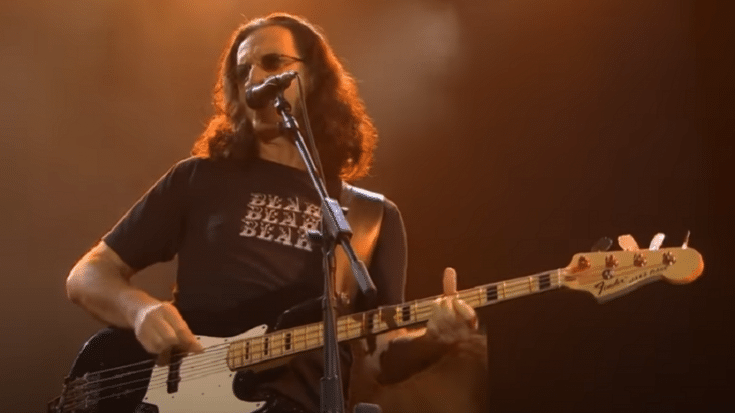 Geddy Lee as a bassist alone is a cut above the rest. But that’s just one duty he used to do on stage because he’s also Rush’s frontman, lead vocalist, and keyboardist. Imagine the amount of talent and skills you need to have to pull it off especially in a live setting. He has inspired countless musicians including those who went on to become rock legends too such as Metallica’s Cliff Burton, Iron Maiden’s Steve Harris, Dream Theater’s John Myung, and Les Claypool.

In honor of this bass hero, here are ten of his finest performances:

One of the proofs of Lee’s genius is in the classic hit “YYZ”. He’s always been creative and inventive. And while most bass players are content to blend in the background, Lee steals the spotlight with his bass performance. There’s nothing quite like it especially if you listen to the isolated bass, it’s hands-down glorious.

Even professional bass players admit this one isn’t easy to pull off. It’s the very definition of a masterpiece – the bass solo is a tad short but it’s more than enough to hook you in.

An underrated gem in Rush’s catalog, the isolated bass track will simply blow you away. It’s captivating especially when you watch Geddy Lee play it live – looking at his fingers makes you think he’s not human. Also, his vocal performance is superb.

Lee kicks off the song with a show-stopping bass solo. And he does it flawlessly. He doesn’t stop there though, his bass performance from start to end is simply riveting.

How Geddy Lee can play the bass and sing the song at the same is beyond us. The bassline isn’t too complicated in comparison to other Rush songs but it’s impressive all the same.

Another Rush track that’s been unfairly overlooked, it’s an absolute bass-gasm. Rush is one of the few rock acts whose songs sound so much better live and this is no exception. The bassline is wild and insane.

Lee delivers the goods with the solo – a sonic onslaught that showcases his immense talent. Also, in the video above, they’re already way past their heyday and yet, they still played it perfectly. Gotta love how Geddy Lee’s having so much fun.

Pure magic. Lee’s musicianship is off the charts and he essentially broke every single rule about the bass. His bass performance here is a musical journey all by itself.

Another stunning number. We’ve seen Lee play the bass and sing countless times and yet, it still baffles us how he can do both duties perfectly. His multitasking skills are as legendary as him, just listen to this song.

Truly one of the best, the idea for the song came to Geddy Lee when he was messing around with a fretless bass. They finished recording it in just a day.