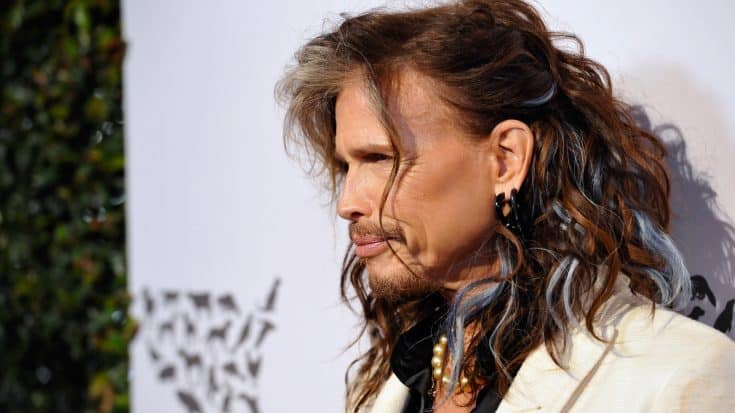 HOLLYWOOD, CA - MAY 07: Singer Steven Tyler attends The Humane Society Of The United States' To The Rescue Gala at Paramount Studios on May 7, 2016 in Hollywood, California. (Photo by Michael Tullberg/Getty Images)

For decades, Steven Tyler has written a lot of songs not just for his band. But with all the great tracks made by Aerosmith, we created a list of top 10 songs that were written by Tyler,

When we hear the words Nine Lives, we think about cats. But this song, as Tyler describes it, is about life’s ups and downs. After Aerosmith recorded the song, they decided to use the phrase as the title of its new album as well. Nine Lives was “different in the sense that we hit upon a couple of East Indian vibe type-things” Tyler said on Charlie Rose.

This song was co-written by guitarist Joe Perry and songwriter Desmond Child. It was inspired by the story of Tyler going to nightclub with all his roadies and seeing this very curvy big blonde lady with all the black nails and beautiful skin who turned out to be a dude and it’s Vince Neil of Motley Crue. Steven started saying, “That dude looks like a lady!” And that’s where it was born. At that time, Aerosmith was worried about offending the LGBT community because they didn’t want to come off as jackass rock stars making fun of them.

Steven Tyler and Joe Perry wrote the original song. But in 1986, another version of the song was released featuring the rap superstars Run-DMC. When these two groups teamed up to record a mashup of Aerosmith’s “Walk This Way,” they changed the course of music history. It all started when music producer Rick Rubin always wanted to do a ‘white rock song that can be turned into a rap song’ as what he did with the other bands. Then Spin magazine editor Sue Cummings introduced Run-DMC to Aerosmith. She had a thought sparked by Run’s riff of “Walk This Way.” Tyler also said that he is a fan of rap himself so doing this collaboration must have been really fun for him.

As Steven Tyler tells it, the song was inspired by one of his pre-sobriety days when he found himself in a hotel hot tub with a group of women. When they moved the party to his room, they piled into the hotel elevator wearing nothing but towels and bathrobes. One of the ladies fooled around and push all the buttons in the elevator, which brought it down to the lobby. One of the girls opened her robe to show Tyler her body and elevator doors opened, giving the crowded lobby a look. Tyler wrote the lyrics, but was worried about the title. Perry pointed out that they already had a song called “Dude (Looks Like A Lady)” which worked out fine for them, so they went with “Love In An Elevator.”

This song doesn’t feel like its ever got the same recognition as some of their other hits around this period of the band’s history. But this song is really catchy and just really makes you want to shut up and dance.

This is one of the most iconic songs of Aerosmith and was their first single released. The band’s manager had the whole band share a house and concentrate on writing songs for their first album. Tyler had been working on the song on and off for about six years, and was able to complete it with the help of the rest of the band. Tyler explained: “It’s about the hunger to be somebody: Dream until your dreams come true.”

4. “F.I.N.E.*”
From: Pump (1989)
The title stands for F*cked up, Insecure, Neurotic and Emotional. So when they say they’re FINE, they may be referring to this meaning instead of the dictionary definition. This song is pure rock and roll that just makes you want to jump around like you’re at a 80’s rock show.

Tyler wrote this song with Perry and Glen Ballard, who is best known for co-piloting Alanis Morissette’s Jagged Little Pill album. In an interview Ballard told the story: “I wrote that in Miami at the Marlin Hotel, Suite 205, with Joe Perry and Steven Tyler. We were down there for six months making a record and I had this whole set-up in my suite at the Marlin. Steven Tyler, talk about hearing somebody sing! He could sing for 12 hours straight when we were writing and never get tired. I don’t think I’ve ever been around a singer who never gets vocally tired. I mean, cast-iron pipes. His range is utterly tremendous – he’s one of the greatest singers and it goes unrecognized just how many things he can do. We were just trying to be funny. We were just having fun that day, and it’s Aerosmith, so of course I’m not going to do a Wilson Phillips song with Aerosmith. We started off with a riff and we made it right there in that hotel room. That was some of the most fun I’ve ever spent, and the guys were all sober then, so I was getting them high on coffee all day long. I had an espresso machine in my room and Steven was totally into it. We would drink like 10 cups of coffee and write. It’s a coffee high for the whole album.”

Aerosmith fans know the rivalry between Joe Perry and Steven Tyler. They were known as “Toxic Twins,” and the nickname stuck because it was so true to their lifestyle during the time they were using drugs. Perry was known as “Mr. Sweet Emotion,” and Tyler based the song on him. The first line is a reference to Perry’s girlfriend Elissa and the rest was all about the toxic twins’ ugly differences. Despite the tension behind the song, it was really beautiful thus it became Aerosmith’s first top 40 single on the Billboard Hot 100.

This song won the Grammy award for Best Rock Performance By A Duo Or Group With Vocal and the band performed the song at the 1994 ceremony. It talks about the chaotic world and the people that remain stuck in their routines and refuse to change. According to the Aerosmith autobiography Walk This Way, the song was inspired by the Los Angeles riots of 1992, which took place after the white police officers accused of beating the black motorist Rodney King were acquitted.